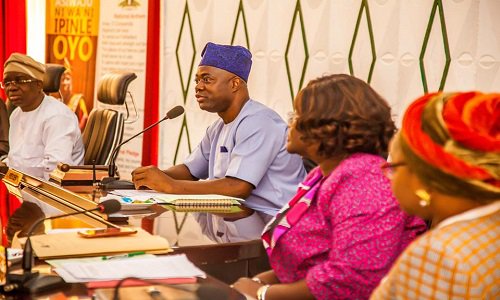 Oyo State Governor, Mr. Seyi Makinde, has disclosed that the security threats confronting the people of the Southwest will soon be a thing of the past as governors in the south west region are collaborating on the launch of a joint security outfit codenamed: “Amotekun” soon.

The Oyo State Governor said the decision to launch the joint security outfit was part of the resolutions reached at the various security stakeholders’ meeting held in the region at various times.

The governor also disclosed that his administration would, before the end of the year, launch the Oyo State Development Association for Socio-Economic Renaissance (OYODASER) and the state’s vigilance services.

According to him, the OYODASER, which will be a better version of the defunct MAMSER, will be used as a vehicle to make people believe in his administration and carry them along in governance.

Makinde spoke while hosting top officials of the Vigilance Group of Nigeria and the Community Development Council (CDC), who paid a courtesy call on him in his Agodi, Secretariat, Ibadan, office.

Speaking on various efforts being put in place to nip insecurity in the bud in his state and the region as a whole, Governor Makinde said the security architecture he planned to unveil soon would also be linked to the emerging Southwest security structure codenamed: “Amotekun,” being worked on by all the governors of the six Southwest states.

He reiterated the readiness of his government to partner with the VGN and CDC to find a lasting solution to the internal security challenges in the state.

Makinde said: “We want to have OYODASER and apart from this, we will have the Southwest-wide initiative known as “Amotekun,” with the operatives known as “Irunmole.” But it is clear that the government cannot do it alone when it comes to the issue of security. We need to work together.

“Maybe in the past, some promises were made and not fulfilled. That was in the past. This administration will not tread on that path. We will make sure we do whatever we say”.