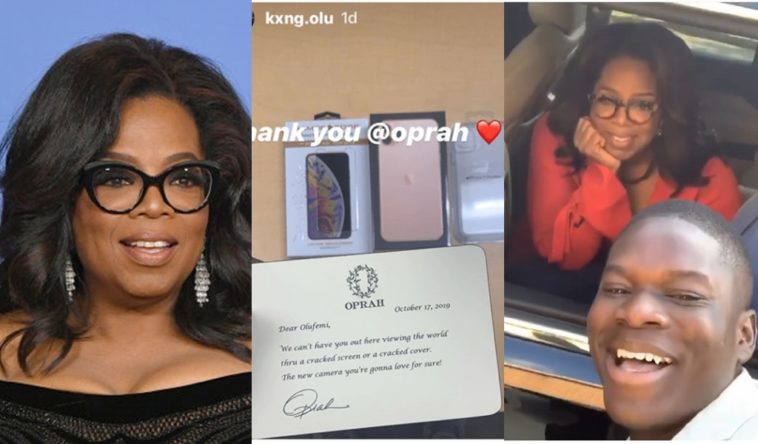 If you’re lucky enough to meet Oprah Winfrey, she might gently roast you over the condition of your phone before gifting you a new one.

That’s what Morehouse College freshman Olufemi Yessoufou learned after a recent run-in with the multimedia star. Earlier in October, Oprah paid a visit to the Atlanta learning institution where she was honored for her decades-long commitment to a scholarship fund she first established in 1989.

Following her appearance, a couple of Morehouse freshmen caught up with her on the street as she was driving away. They spent a few minutes chatting after her car stopped, and she even took the time to pose for a selfie.

It’s a sweet moment, complete with the aforementioned good-natured ribbing over the state of Yessoufou’s phone screen. “She played me,” he wrote on Twitter in a post featuring the short video.

she played me 😂🤦🏾‍♂️ @Oprah pic.twitter.com/1Hyt7jOkDj

For most of us a little facetime with Oprah would be plenty, even if she spends some of it judging the level of care we give to our smartphones. Yessoufou probably thought that was the extent of his own run-in after posting the adorable video back on Oct. 7.

But that wasn’t the end of it. On Friday, an excited Yessoufou took to Twitter. This time, he shared a photo of what can only be described as an iPhone gift package, along with a note on ornate Oprah stationery.

“We can’t have you out here viewing the world thru a cracked screen or a cracked cover,” the sweet missive read. “The new camera you’re gonna love for sure!”

The encounter blew up after that, quickly transforming into a Twitter Moment and drawing all kinds of fun and funny responses from the social media peanut gallery.