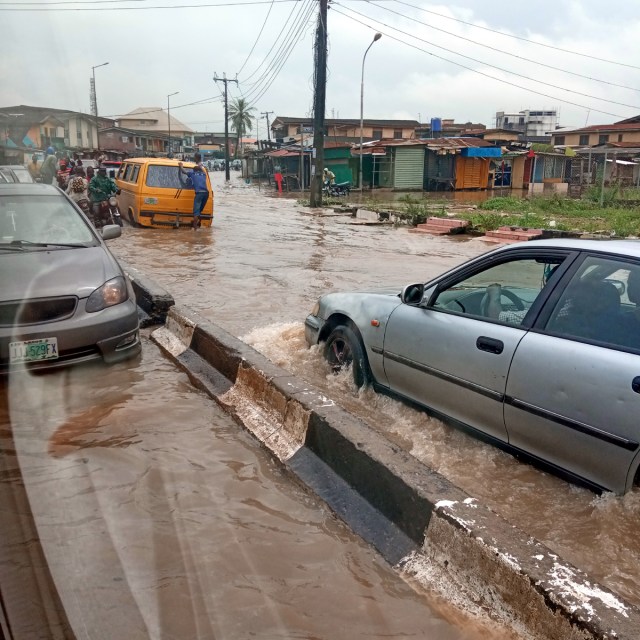 Residents of Lagos State were again trapped in their homes and some others spent hours in traffic as a result of heavy downpour.

The clouds had darkened since Friday, showing signs of an impending rain, but it was yesterday when the clouds opened its bowels and the rains poured. The showers continued non-stop, affecting people in different parts of the city.

The rainfall, which started as early as 2 am, Sunday lasted for several hours into the evening leaving most parts of the state flooded with attendant traffic gridlock on the roads.

Residents of Discovery Estate, Riverview Wing of Opic, Isheri, Lagos-Ogun States border, Adegbola Babatunde, lamented over the inability of members of their family to move out of their homes which was heavily flooded due to the release of Ogun Dam which has taken over the entire house.

On Friday, the state government had alerted residents of Ikoyi, Victoria Island and other parts of the state that flood could last throughout the weekend, owing to the release of water from the Oyan Dam. Following the flood occasioned by the release of water from the dam, which has submerged its headquarters office in Ogun State, the management of Core TV News has announced a temporary shutdown of the station.

In a statement released at the weekend, the Managing Director and founder of the station, Olajide Adediran, said the decision, though a painful one to take, was designed to safeguard the lives of its members of staff and the station’s multi million naira equipment from further damage. He urged the Ogun State government and other stakeholders to find a lasting solution to the issue of release of water from the Oyan Dam, assuring the general public that the station would bounce back in the next few days once the situation improves.

He said: “The operations of the station have become near impossible over the last 48 hours following the rise in water levels in its discovery gardens estate headquarters within the Isheri/Opic estates just off the Lagos-Ibadan expressway. We plead with our staff members and our teeming viewers to be patient and endure with us, we shall come back on air as soon as the situation is receded.”

The Lagos State government had earlier warned that the state may record more flooding owing to the rise of water sea level. The lagoon is said to be having difficulty discharging water into the ocean causing backflow into the drainage channels. But Environment and Water Resources Commissioner, Tunji Bello, says officials are working on different measures to remove the constriction and blockades to ease free passage for the resultant flooding.

The state government is also in talks with the officials of the Ogun Osun River Basin Authority, which is releasing water to do so gradually. He explained that the rise in sea level has contributed to the current flooding in many parts of Ikoyi, V.I, Dolphin and Oworonshoki as the lagoon cannot discharge and is causing back flow into drainage outlets.