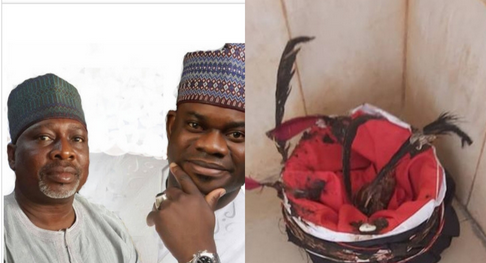 Elder Simon Achuba, the impeached deputy governor of Kogi state has been accused of leaving a charm in his government house apartment after he hurriedly exited the residence by Asuku Jamiu Abdulkareem; new Chief of Staff to Kogi State Governor.

WITHIN NIGERIA had earlier reported that “the deputy governor of Kogi State, Elder Simon Achuba has been removed from office by the Kogi State House of Assembly on Friday as the Kogi Chief Judge, Justice Nasiru Ajanah is expected to swear in Chief Edward Onoja as the new deputy governor of the state on Saturday.

This was revealed by Alhaji Jamiu Abdulkareem in a facebook post that the maintenance officers and security personnels went to prepare the place to host some visitors for today’s flag off Rally.

”Forgotten juju item by impeached deputy Governor of Kogi. We found this at his official residence after he hurriedly moved out. This is really sad. Achuba has been informed to come pick his item.

In Kogi, we believe in God not juju. Maybe this explains why he is no longer part of the “New Direction” government” he wrote

The impeached deputy governor who speaks on the Pulpit at Knowledge of the Truth Church Lokoja, equally led a government delegation of Christians to the holy land in 2016.