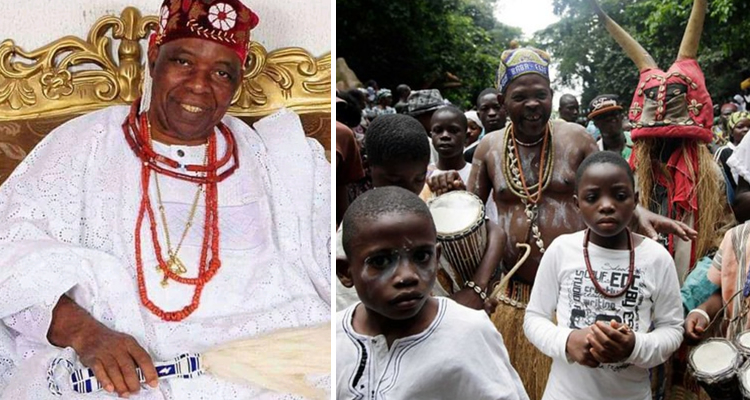 There are two versions of story about how Ìjẹ̀sà people come to be. One is traced to Odùduwà and the second is a pure myth.

The first one says: Odùduwà understandably had several children, grand-children, and great grandchildren. I have great cause to believe he had more than seven children as said by Yorùbá histories. Of course, amongst the most known were the king of Ado (Ewì Ado), Ajibọsin (Olòwu) of Òwu, Àlàáfín (Ọ̀ranmiyan) of Ọ̀yọ́, Osomowe of Ondo (from a daughter), the Ọ̀ràngun of Ila, the Aregbajọ of Ìgbàjọ, the Ọwá Ajíbógun-Ajaka of Ilesa.

Note that there were two Àjàka in Yorùbá histories; the ‘second’ Àjàka was the son of Ọ̀ranmiyan, senior brother to Sango (Yorùbá god of thunder). This Àjàka was both the second and fourth Àlàáfín of Ọ̀yọ́….

The story of the last mentioned goes thus:

When Odùduwà became blind from old age he was much depressed in mind from this cause; efforts were put forth to effect his cure, all of which proved fruitless, when a certain man came forward and prescribed for him a sure remedy which among other ingredients contained salt water. He put the case before his children, but none made any effort to procure some for him save Ọwá Ajíbógun, his youngest grandson.

Other narrations say Ọwá was just another unmentioned, direct sons of Odùduwà.

He was a very brave and warlike prince who bore the title of Esinkin amongst the King’s household warriors, a title much close to that of the Kakanfo. He was surnamed Àjàka, i.e., one who fights everywhere, (on account of his procacity) being fond of adventures. He was the only one who volunteered to go and fetch some wherever procurable.

Having been away for many years and not heard of, the aged sire and every one else despaired of his ever coming back; so the Odùduwà divided his property amongst the remaining grown-up children.

After they had all gone and settled in their respective localities, all unexpectedly, the young adventurer turned up with water from the sea. The monarch made use of it as per prescription and regained his sight!

Let me digress, the “certain man” was a king in the then far part of the country. He was both a friend of Odùduwà and the priest who recommended the Òkun (brine) water. He was said to have cordial relationship with the Yorùbá progenitor and enjoyed many trips to Ootu-Ifẹ. So it was “Oore”, of presentday Oore of Mobaland in Èkìtì, that performed the rites processions so that Odùduwà could regain his sight.

Odùduwà was so happy and started calling this great king from Èkìtì land “Oloore Mi” (My benefactor) which later shorten to “OORE”. The king’s title become Oòre, the title of the present Oòre of Moba land in Èkìtì.

The most popular song in Moba:

Back to the rail: the Ìjẹ̀ṣàs who subsequently became Ọwá Ajíbógun’s subjects are termed “Ọmọ Obokún,” children of the brine procurer.

Having distributed all his property he had nothing left for Ọwá Àjàká he therefore gave him a sword lying by his side with leave to attack any of his brothers, and possess himself of their wealth, but should he fail, to retire back to him; hence the appellation “Ọwá Àjàká Onida raharaha” (Owa the ubiquitous fighter, a man with a devastating sword).

A statue of his is at the popular Roundabout front of Ọwá Palace till date of Àjàká holding the legendary sword in one hand and calabash – containing brine he procured – in another.

Ọwá Àjàká chose a spot to settle, a little way from his grandfather. He fought all sides for what later become his land.

This story was first told to me when I was very young by both my mother (of blessed memory) and my half-brother, who is an Ìjẹ̀sà. I later found that most Ìjẹ̀sà – if not all – hold this same version of story with no difference.

The mythical edition: when the nations began to disperse from Ilé-Ifẹ̀, after the historical Ìta Ìjèro conference, and members of the Royal Family were appointed kings and rulers in diversed places, a young and brave scion of the house was appointed the first Ọwá or king over the Ìjẹ̀ṣàs, but that he returned to the Àlàáfín and complained that his territory was too small, and his subjects few, the sire thereupon ordered a large bundle of sticks to be

brought to him, and these sticks he converted into human beings for the Ọwá, in order to increase the number of his subjects. Hence to this day the Ìjẹ̀sàs are often termed by their neighbours “Ọmọ igi” (offspring of sticks!)

This, of course, is a pure myth invented by their more wily neighbours to account for the notorious characteristics of the Ìjẹ̀sàs generally, who are as proverbially deficient in wit as they are remarkably distinguished for brute strength.

HOW THE NAME ‘ÌJẸ̀SÀ’ COME TO BE

As discussed above, Ọwá Ajíbógun was only a conqueror. The “Ijẹ̀sà providence” had aboriginal inhabitants before Ọwá Ajíbógun comquered it, whose story goes down to the earliest period when the Yorùbás have just entered into – and subdued – the country, and the Àlàáfín then resided at Ilé-Ifẹ̀, i.e., prior to the reign of Àlàáfín Sango.

Human sacrifices were common in those days, and in order to have victims ready to hand, it is said that a number of slaves were purchased and located in the district of the presentday Ibokún; there they were tended as cattle, under the care of a certain man called Ọwáju, and from them selections were made from time to time for sacrificial purposes; hence the term Ìjẹ̀sà from Ijẹ Òrìsà (the food of the gods). They are described as stumpy, muscular, and sheepish-looking, with a marked want of inteligence: they never offered any resistance to this system, hence the saying “Ìjẹ̀sà Ọmọ Ọwáju t’ìfẹ́ òpó ikẹ ” (Ìjẹ̀ṣàs children of Ọwáju, subject to much sufferings).

Yet it is evident that the present inhabitants are not all of them the descendants of the aboriginal settlers, the ” food of the gods,” but are largely from the Èkìtìs by admixture; the pure type Ìjẹ̀ṣàs are now and again met with at Iléṣà and neighbourhood.

Well, till total abolition of human sacrifice by the British Government in 1893, the Ifẹ̀s, who, far more than any other, were addicted to the practice, always preferred for the purpose to have an Ìjẹ̀sà victim to any other; such sacrifices were considered more acceptable, the victims being the “food of the gods.”

This preference was the cause of more than one threatened rupture between the Ifẹ̀s and their Ìjẹ̀sà Allied Forces during the16 years’ war, and would certainly have developed into open fights, but for the Ìbàdàn army vis-d-vis threatening them both.

While tagging this people as descendants of Èkìtì, Samuel Johnson wrote: It appears that a custom then (in Èkìtì) prevailed of going out hunting for their king three months in the year, and on one such occasion they found game so plentiful in the neighbourhood of Iléṣà (Ilé Oosa – home of the gods) the climate very agreeable, the country well-watered, and the Ìjẹ̀ṣàs there extremely simple, peaceful, and un war-like) probably the remnants and descendants of the old sacrificial victims…whilst at home they endured much oppression from their Ọwá (Ajíbógun Àjàka) that they there and then conceived and carried out the idea of settling on the spot at once, making it their home, and of reducing into subjection the aboriginal inhabitants.

Ìjẹ̀sà and Èkìtì being neighbours considered themselves brothers and this made them share some common features. Like best food, dress code and even language (dialect and accent). It’s related that a prominent king of Èkìtì Ẹ̀fọ̀n (Ẹ̀fọ̀n-Aláayè) known as Alààyè Ọ̀gẹ̀gẹ̀ Èpò observed Ìjẹ̀ṣà was not large enough to form a nation like Èkìtì land and chose to carve out nine towns from Èkìtì land to form part of Ìjẹ̀sà land after they (the Ìjẹ̀sà) have failed in their several campaigns against Èkìtì.

Ìjẹ̀sà were not without hitches in their bids towards creation of their own State.

This is believed to have taken place amidst their Administration.

Samuel Johnson wrote: this fact is fuither shown by the want of homogeneity amongst the principal chiefs of Iléṣà at the present day, for when the town was growing, the settlers did cast about for help; they sought for wiser heads to assist them in the building up and the management

lastly, the Ogboni from the white cap chiefs of Lagos, the only one privileged to have on his headgear in the presence of the Owa. The Owa himself is as we have seen, a junior member of the royal house of Oyo.

“It is also said that when the town of Ilesa was to be laid out a special messenger was sent to the Àlàáfín to ask for the help of one of the princes to lay out the town on the same plan as the ancient city of Ọ̀yọ. That prince ruled for some years at Iléṣà.”