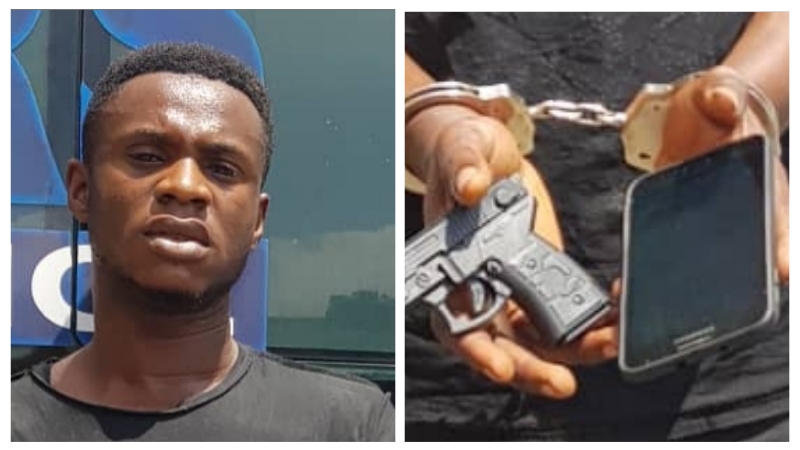 Lagos State Police Command has arrested a Madonna University dropout for allegedly luring female members of the church he works in to hotel rooms, taking their nude photos and blackmailing them with it for money.

The suspect identified as Victor Duru, 23 was arrested in Surulere after a complaint of blackmailing was filed by his girlfriend and church member at the RRS headquarters and nude photos of other ladies were found in his possession.

According to reports, the nude photos of his victims were obtained with the assistance of a third party at a gunpoint and through lacing their drinks.

Confessing to the crime he said “She was my girlfriend. We are same church member. We have been dating for almost two years. We were having break up issues.

“So, I invited her to an hotel in Ijeshatedo. I excused myself and invited my friend, Frank Obinna, to meet me in the hotel. Obinna and I had this planned together.

“The gun was a toy gun. He entered the hotel room and held the lady at gun point. I told her to cooperate, naked her for Obinna to take her pictures. We took seven different shots of her in the nude with my phone. I discharged her that day. This was in September.

“She promised to send something. She was a wonderful girl that had been assisting me before the problem started. On many occasions, she has assisted me financially.”

The suspect and the exhibits recovered from him (toy gun, mobile phones containing the nudes of the ladies) have been transferred to the State Criminal Investigation Department (SCID), Panti for further investigations.