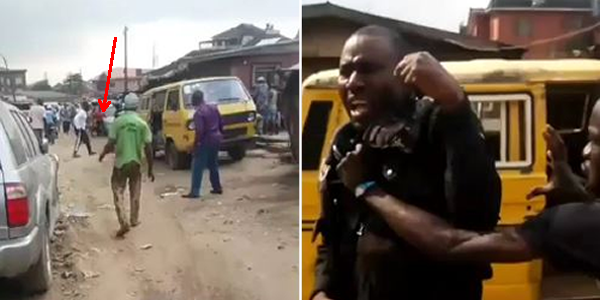 Policeman mobbed at Oshodi after knocking down elderly woman (Video)

A video of some residents manhandling a member of the Nigerian Police Force in Lagos State has made it way online.

According to report, the Police van knocked down an elderly woman at Ile-film junction at popular Oshodi area of the state while they were driving recklessly chasing an alleged yahoo boy, his colleagues however drove off and abandoned him behind.

In the video, the police officer seemed helpless as he was surrounded by able young men dragging him and another man could be seen driving punches at the policeman.

Luckily, help came for him after an elderly man interfered and sympathized with the police officer, as he could be seen in the beginning of the video trying to pull the policeman off from the crowd but the crowd wouldn’t let him.

The policeman was helpless throughout as he tried to defend himself. A voice could be heard in the background shouting ole, ole (meaning thief, thief) as the policeman tried to run from the mob.