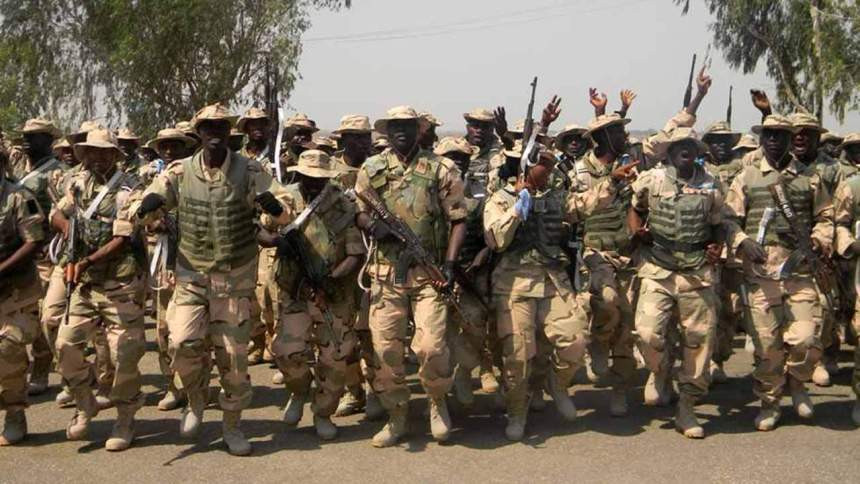 130 soldiers placed on court martial for various offences in Borno

The Nigerian Army has revealed that no fewer than 130 soldiers accused of various offences in the course of their duty have been placed on court martial and further disclosed that the trial is said to have the largest number of soldiers in the history of Nigerian Army court martial.

The soldiers attached to the theatre command of Operation Lafiya Dole in the Northeast are standing trial for several offences which include dereliction of duty, indiscipline, desertion, cowardice and lackadaisical attitudes to the fight against insurgency.

According to reports, most of the affected soldiers reportedly in their early 20s and late 20s, will be facing trial in two military court martial which has been inaugurated by the Theatre Commander of Operation Lafiya Dole and the Acting General Officer Commander (GOC) 7 Division of the Nigerian Army in Maiduguri Maj.-Gen. Olusegun Gabriel Adeniyi, based on the provisions of Section 131(2)(d) of the Armed Forces Act, CAP A20 LFN.

Speaking ahead of the court martial, Acting GOC Brig.-Gen. Abdul Ibrahim said “The military, all over the world, is known for the maintenance of discipline and decorum while discharging its duties. The ability of the military to ensure success in operations is better achieved when the ethics and traditions aimed at enhancing discipline are encouraged.

“In this regard, acts of cowardice, desertion, unsoldierly behaviour and other forms of indiscipline have no place in the Army, more so, an army executing a war. It is against this background that I decided to convene a General Court Martial under my command.

“The powers conferred on me as a GOC under Section 131, sub-section (d) of the Armed Forces Act, CAP A20 LFN, are brought to bear in fulfilling this command reasonability.”

The GOC assured all that the court martial would be impartial.

“This court does not have any special interest to serve rather than routine duties carried out within the legal confines of regimentation.

“This goes to show that the principle of natural justice, equity and fairness, which are enabling pillars of this General Court Martial, will surely guide its conducts throughout.”

Judge Advocate of the Court, Captain Aminu Mairuwa who announced that about 80 soldiers were facing trial said those convicted would have a chance to appeal at a higher court. Two special court martial inaugurated by the Theatre Commander, Operation Lafiya Dole, Maj.-Gen. Olusegun Gabriel Adeniyi have already started the trial of about 50 senior and junior military officers.

“It is worrisome to observe the increasing cases of negligence, lackadaisical and cowardly attitudes of many of our personnel during Boko Haram Terrorists (BHTs) offensive actions across the theatre today.

“These unprofessional and disgraceful habits have led to the death of many of our gallant colleagues and these attitudes must not be allowed to continue, if we must retain our national pride” the theatre commander said.