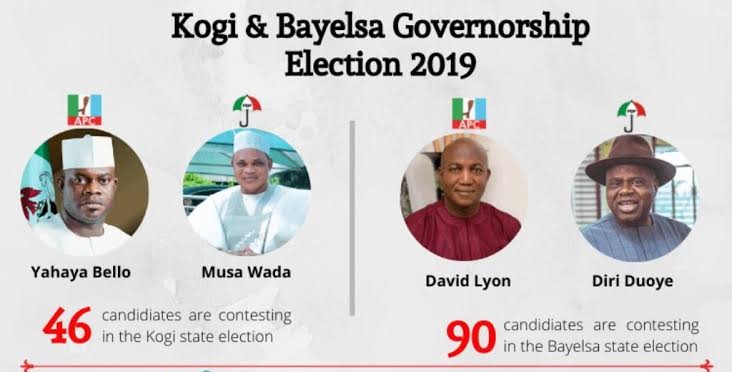 The people of Kogi and Bayelsa state trooped out in masses to elect their governors who will pilot the affairs of their states for the next four years.

In Kogi state, the battle of who emerges governor of the state is clearly between the incumbent Governor, Yahaya Bello of the All Progressives Congress, APC, and the Peoples Democratic Party, PDP’s Engr. Musa Wada. While in Bayelsa, the contest is expected to be between David Lyon of the APC and Duoye Diri of the PDP.

Voters started trooping to the various polling units as early 6.45 am waiting patiently for the electoral officers.

STAY CONNECTED HERE ON WITHIN NIGERIA FOR LIVE UPDATES!!! Refresh and Scroll down. Thanks

8:24 AM: Suspected thugs said to have disrupted exercise in Omala LGA in Kogi State.

A group of thugs brandishing cutlasses forced journalist to make a U-turn in Opolo, Yenegoa. The thugs were about 15 in number. Their presence also scared voters who ran helter-skelter to avoid being inflicted with machete cut injuries or killed. The thugs had given a sign to journalists, voters and other observers to turn back or be ready to face the consequence.

9:10AM
The Deputy Director, Public Communications of the Kogi State Peoples Democratic Party Campaign Council, Usman Austin, on Saturday said two young men who dressed in the uniform of officials of the Nigerian Security and Civil Defense Corps (fake NSCDC officials) have been apprehended in Ayingba Dekina Local Government Area by the people.

News reaching WITHIN NIGERIA has it that some Party agents are interfering with the voting process at Yenagoa,ward 07, PU 08 Igbenbiri Ogboloma in Bayelsa State.

09:34AM
As at 09:34am Materials are yet to arrive at Jonathan’s polling unit in Otuoke. The materials were still at Community Secondary School, Otuoke, from where they will be distributed to various wards in the community.

There was heavy shooting at Ayetoro ward 1 unit 004 where Dino Melaye voted this morning.

some hoodlums in two Hilux vans an Honda Civic stormed the place, shooting into the air and targeted the ballot box.

The ballot box was eventually taken away while some boys in the community chased the vehicles with no success.

The PDP governorship candidate, Musa Wada, was accredited at Odu Ward 4, Unit 001 in Odu-Ogboyaga, Dekina Local Government Area, Wada was unable to vote in his polling due to malfunctioning of the card readers, but later voted at another polling unit.

13:16PM
News reaching WITHIN NIGERIA has it that an unidentified official of the Independent National Electoral Commission (INEC) has been abducted in SUBEB polling unit in Lokoja.

The abduction occured after gunmen shot sporadically into the air while voting was going on.

It was gathered voters scampered for safety before the gunmen went away with the official.

Some of the corps member’s colleagues, who were also on election duty, explained that the hoodlums stormed the polling unit at 1pm at began to threaten INEC officials.

14:43PM
Two persons have been shot at Egume Police Station Polling Unit, Dekina LGA.
It was also gathered that violence has broken out in at least four polling centres in Lokoja, the state capital.