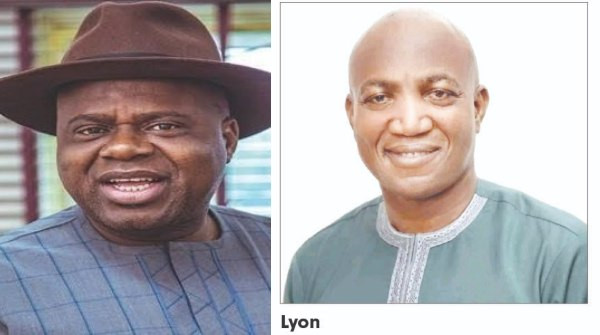 Bayelsa PDP Guber candidate lambasts INEC, demands that he should be declared as winner

The Governorship Candidate of the People’s Democratic Party (PDP), Senator Douye Diri in Bayelsa state has stated that  he won the just concluded gubernatorial election held in the state on Saturday, November 16.

Senator Diri asked the Independent National Electoral Commission (INEC) to declare him as the winner of the election.

He lambasted the INEC body for announcing that the All Progressives Congress (APC) candidate Chief David Lyon won the election with 352, 552 votes while he only got 143,172 votes.

The PDP candidate accused INEC and the Army of connving with the APC to rob him and the PDP of their victory even though his party’s situation room report showed that he won in all the local government areas.

He further stated that the APC was not supposed to be on the ballot based on a court judgement issued before the election.

“We believe that the subsisting court judgment that disqualified APC as of the time the election was conducted. The request by PDP agent at the state collation centre, Dr Don Osusu that INEC should produce the order which made APC presence during collation legitimate was ignored.

“We urgently call on INEC to declare me winner. It is only shameful and laughable that INEC would manufacture figures. For us the rule of law is under threat in this democracy; anarchy is looming in this democracy, democracy is being raped.  All the figures reeled out are a charade and a ruse”