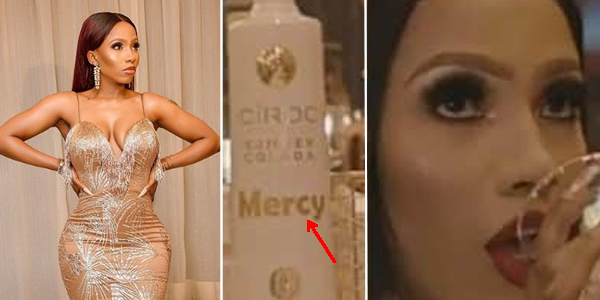 The queen of highlight  has signed a partnership deal with Ciroc Vodka.

The Winner of Big Brother Naija ‘Pepper Dem’ season, Mercy Eke flaunted the deal on her Instagram page some moments ago, with a video, which she captioned,

“In the end, stars always align and world’s collide”.

In other news, shortly after controversial investigative journalist, Kemi Olunloyo revealed that Tacha’s recent partnership deal with alcoholic juice company, Ciroc, is just fake and a PR stunt, by Tacha’s management, her manager, Teebillz took to Instagram to react.

Reacting to the allegation, Tacha’s manager, Teebillz ordered for two of the customised drink. “May I have a double shot of Tacha fierce please”, he wrote.

VIDEO: Pastor Evans reveals what Anthony Joshua must do to avoid another shock of defeat in December

‘Single and not searching’ – Mercy Eke confirms split from Ike