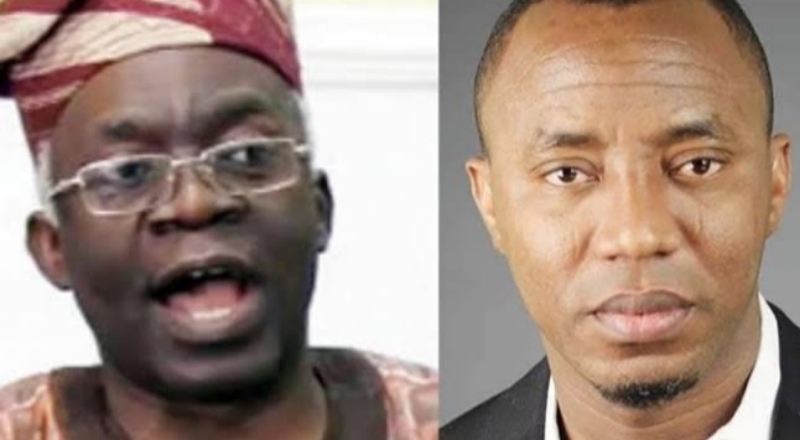 Following the continuous detention of Omoyele Sowore and Olawale Bakare popularly known as Mandate, popular lawyer and activist, Femi Falana has raised a fresh alarm on plans by the Department of State Services to transfer his clients to solitary confinement at a correctional center.

This was revealed in a letter dated December 1, 2019 which was addressed to the Attorney-General of the Federation and Minister of Justice, Abubakar Malami (SAN).

Sowore’s lawyer, Femi Falana requested the Attorney General of the Federation to direct the Department of State Services to release his clients.

Falana said that the Nigerian Government through the DSS had applied to the Federal High Court in Abuja for an order of transfer of the activists to a secluded prison where they would not have access to their lawyers and family members.

Falana said, “Instead of purging the security agency of such contempt of the Federal High Court, the prosecutor, Dr Hassan Liman (SAN), engaged by your good self to prosecute our clients, has curiously applied to the trial court to have them transferred to a correctional centre and detained indefinitely for having the temerity to question the illegal directive to produce their sureties.”

Falana also threatened to report the AGF to the Nigerian Bar Association and the Legal Practitioners Privileges Committee for encouraging the agency to treat orders of courts with disdain.

The letter reads, ” In treating the court order with provocative contempt, the State Security Service has insisted on approving the sureties of our clients after they had been verified by the Federal High Court. “From the information at our disposal, there is no precedent whatsoever for the illegal demand.

“Take notice that if you fail to accede to our request, we shall be compelled to carry out the firm instructions of our clients to pursue the contempt proceedings which have been initiated against Mr Yusuf Bichi, Director-General of the State Security Service.

“In addition, we shall also report your good self and the prosecutor to the Nigerian Bar Association and the Legal Practitioners Privileges Committee for encouraging the State Security Service to treat orders of Nigerian courts with disdain while you are anxious to obey the orders of British courts.”  The activists have been in the custody of the DSS since August 3 despite two court orders directing their release.