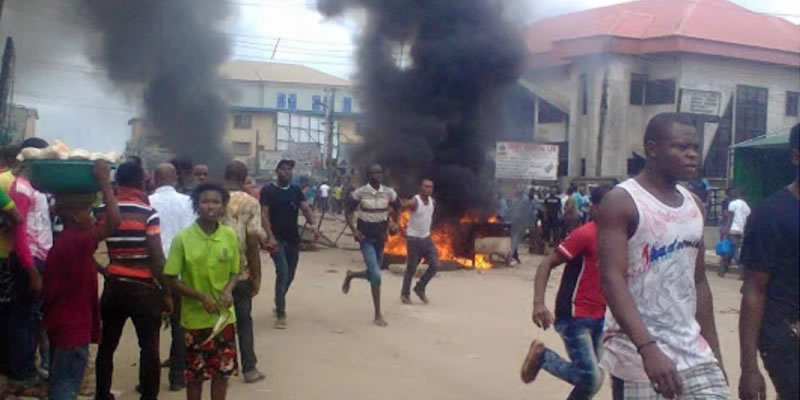 Jungle Justice was melted when two suspected motorcycle thieves whose names were yet to be ascertained were apprehended and set ablaze by mobs in Mbaise, Imo State.

The incidents, which happened separately in Umuoma Ogbe and Oboama Nguru communities in Ahiazu and Aboh Mbaise council areas respectively, saw the mobs meting ‘jungle justice’ on the suspects.

According to report the suspects have been terrorising Mbaise and its environs.

Eyewitness account disclosed that the Ogbe incident happened around 7:30am when the deceased stole the motorcycle from where it was parked at the backyard of a house in the community.

Sources disclosed that the motorcycle owner parked and went into a neighbour’s house while the suspect used another key to move the motorcycle.

Further disclosed that when the owner discovered that his bike was missing, he raised an alarm and some commercial motorcyclists around the village chased and apprehended the suspects a few moments later.

“As the youths were beating him, some others brought tyres and set him on fire”, he said.

On the incident at Nguru, it was learned that the suspected thief waylaid a woman riding on a bike and intercepted her to cart away some bikes but was caught in the act.

But his luck ran out this time around as he was caught in the act by a mob which descended on him, beat him black and blue before setting him ablaze .

“Tacha is a bloody nobody, her Titans are senseless animals” – Blessing Okoro blows hot