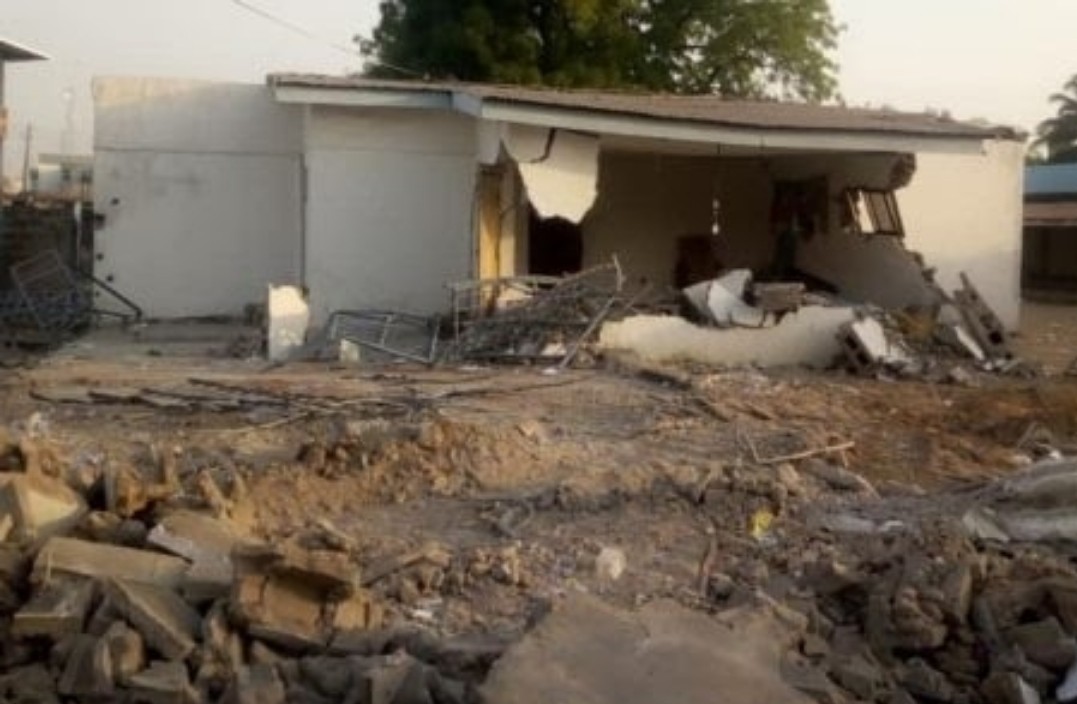 WITHIN NIGERIA reported the controversial demolition of the building, last Thursday.

The judgement was delivered on Monday in Ilorin, the state capital.

The court also said the state government should not go near the land, “either to construct or do anything on the land pending the determination of the Motion on Notice.”

However, according to TheNation newspaper, one of the family’s lawyers, Abdulazeez Ibrahim, said that the order is yet to be served on the parties concerned “because the injunction was secured almost at the close of work on Monday”.

“It was true that we secured a court injunction against the state government, but it took place at the closing hours, so no enroll order was available for the concerned parties,” he was was quoted to have said.

Also, in a statement, the Kwara State Government said it has not been served any court order.

The Communication Commissioner, Murtala Olanrewaju, stated this when making some clarifications on Monday.

He said the property demolished was a ‘shed’ occasionally used for political gathering and “not any home belonging to old people”.

“Contrary to the claims by the opposition, the physical reclamation of the property by the government on 2 January 2020 was without any incident. Nobody was met on the property. It was never a place where people lived in, so the question of ejecting, maltreating or deploying violence against anyone did not arise. No court process has been served on the government.”

Mr Olanrewaju alleged that the whole narrative about government demolishing ‘Ile Arugbo’ was a fabrication by the opposition “to cover up for their lack of any document confirming their ownership of the property bordering the civil service clinic in Ilorin, the state capital.”

“The property is one of the over 100 government assets in GRA, Ilorin Kwara State, Victoria Island Lagos, Kaduna, and Abuja investigated by the Asset Recovery Committee led by Senator Suleiman Ajadi, which were unlawfully converted to private use. Until its physical reclamation, the property comprised only of sheds,” Mr Olanrewaju said.

Governor AbdulRahman AbdulRazaq, the state governor, had last month, announced the decision to revoke the late Olusola Saraki’s property owing to an alleged illegality in its acquisition.

He said the land was originally designated for the construction of a secretariat and parking lot of the civil service clinic, “but that it was unlawfully allocated to a private firm — Asa Investments Limited — without any record of payment to the state government.”

Nevertheless, the son of the late Saraki, Bukola Saraki (ex-Senate President) had earlier countered the statement, saying his late father lawfully acquired the land from the state government.

Mr Saraki, in his reaction, vowed that justice would prevail in no distant time.

Also, Gbemisola Saraki, the transportation minister and daughter of the late Saraki, in her reaction said the demolition was a stain on her personality being a member of the ruling All Progressive Congress.