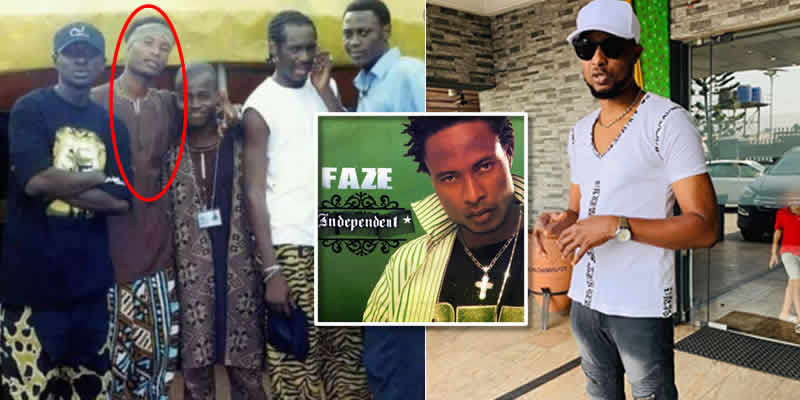 Faze, is a Nigerian musician and actor. He is a member of the defunct hip hop group Plantashun Boyz, along with BlackFace Naija and TuFace.

His third album Originality went platinum in its first month of release. He is the first Nigerian artist to have three consecutive platinum albums.

Chibuzor Oji was born in 1977 in Festac Town, Lagos. Oji is the fourth of a large family of nine children. Faze attended Nazareth Primary School and Festac Grammar School, Festac Town, Lagos before going on to the Ambrose Alli University, Ekpoma.

His parents had their reservations about him going into music because they were scared that he would go haywire but their doubts were however unfounded, although all his family members are said to possess good singing vocals, perfected by the long time spent singing praises during prayers.

Faze has been involved in songwriting and singing since 1994 when he participated in the DBN Karaoke Contest and won. That was the beginning of his trek to stardom.

Although he had always loved singing, he only resolved to take music professionally after meeting Tuface and Blackface, the other members of the then Plantashun Boiz. The singer also revealed that he initially faced difficulty finding the right sound to please his fans, but says he eventually did. The sound which he calls ‘universal flavour’ because according to him, it contains everything from Jazz, Raggae, Soul, Rap, Hip-hop and Soul.

Before joining the popular musical collabo, ‘Plantashun Boiz’, Faze was a Rap artiste under the name ‘Lyrical Orge’. Each member of the defunct Plantashun Boiz went solo after 2 albums in 2004, Faze released ‘Faze Alone’, his first album in the same year under the WestSide Music Label. The album sold over one million copies, his critiques say he used this album to earn pity and favour from fans.

The album achieved platinum status with sales of 1.2 million units in its first month. The single “Faze Alone” did enormously well on Nigerian music charts, reaching number 1 on music charts of notable radio stations like Rhythm FM, Cool FM, and Ray Power FM. The singles “Miss U” and “Angel Gabriella” from the Faze Alone album were also well received. The album introduced Faze‘s signature vocals including his ability to sing the highest note by a male in the Nigerian music industry.

His second album, ‘Independent’ was released in 2006 and sold over 3 million copies. It featured singles like ‘Kolomental’, ‘Tattoo girls’ and ‘Kpodipkokpo’.

In 2006 he won the Hip-Hop World award for Best Vocalist. He releases his material through the record label he owns, Independent Entertainment.

In 2008, he released his third album, ‘Originality’ which went platinum in its first month of release.

Faze is the first Nigerian artist to have three consecutive platinum albums.

He has collaborated with a lot of artists including a recorded single with Wyclef Jean titled “Proud to Be African” in 2004. He was once said to have been signed on to Akon’s Konvict Music and that he was preparing to move over to the United States to continue his music career, a claim which Akon later denied.

Aside singing, Faze is also involved in acting. In 2004, he played a lead role in his debut appearance in the movie titled ‘Lovechild’.

1. Faze faced the major controversies of his career in year 2007, when he was denied by Akon, caught to be in debt mess and was called a fool to his face by an angry fan.

Faze had in 2006, paraded himself as a Konvict music act-to-be. For months, he told whoever cared to listen that he had sealed a deal with Akon and that his album would be on the label. But Akon, speaking to a Nigerian Journalist in Monte Carlo at the 2007 World Music awards, denied ever signing Akon. ‘I don’t even plan to (sign him)’, he reportedy said.

A source who lives in FESTAC Town (a Lagos estate where faze resides) told Ayenithegreat that, ‘he’s a laughing stock now. Everyone is making a joke out of it. I’m sure he must really hate Akon and the journalist that broke that news’.

At the Nigerian music video awards which held in 2007, Faze and his brother-manager Ifeanyi refused to exchange greetings with the said journalist. ‘Even if Akon said so, he should have kept it on the low’, his brother was reported to have said.

2. Also, media reported that the truly-talented singer was enmeshed in a debt mess in South Africa. Though he denied the debt mess. In Port Harcourt, an angry fan called him ‘a fool’ to his face, after he refused to perform at a concert following disagreement with the organisers.

‘I’m going to warn all my sisters and friends not to come for your shows or buy your music. And I’m going to destroy your CDs in my house. I’ve been your fan for years, never knew this was how you were’, screamed the angry fan.

The singer was left with no choice but to perform at the concert which also featured Jamaican reggae star Junior Reid, Mode 9 and De Indispensables.

Faze is reportedly married, however, he has no wedding record online or in any news.