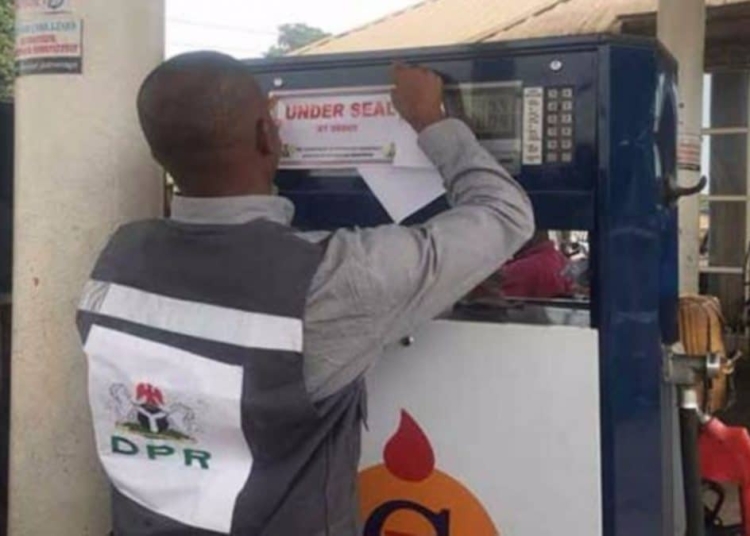 Mr Idris Mohammad, Controller Operations, Kogi Field Office of DPR, who led a team of operatives and men of the Nigeria Security and Civil Defence Corps (NSCDC) during a raid, said the filling stations were defrauding unsuspecting customers, NAN reports.

Mohammed said the office had realised that apart from defrauding unsuspecting customers through pump meter adjustments, most of the stations were operating illegally without operational licences.

At Ajaokuta, the team sealed off and ordered the arrest of the Manager of Binmanda Integrated Global Services filling station at Ohunene for defying the instructions of the DPR by “Refusing” to regularise his operation.

“The operator is not just operating illegally but he is also cheating the public. We asked him to go and regularise his operations but he refused and we have to seal the station.

“Of course, we had to bring in the Civil Defence Corps to enforce compliance with the rules and regulations as provided in the Petroleum Act.

Also at Ajaokuta, the team sealed AdukuObi Petroleum filling station for under dispensing as the station Manager, Usman Yahaya, claimed ignorance of the pump meter adjustment saying he only resumed on Jan.13.

In Lokoja, “Always” Filling Station, Phase One Junction, Lokoja, was also sealed along with its cooking gas outfit for under dispensing and non-compliance with rules and guidelines guiding the industry.

News Agency of Nigeria (NAN) reports that during the raid on 11 petrol and gas stations, the DPR also sealed two gas dispensing outfits, one each in Lokoja and Ajaokuta.

“We are doing this because they are cheating the public and the procedure is that if you are caught cheating you must go and pay a penalty,” the official said.

He added that the penalty was N100,000 fine to be paid into our TSA account for each pump sealed in addition to other punitive measures to serve as a deterrence to others.

Mohammed decried the high level of non-compliance among operators in the state and called on marketers, LPG plants and petrol stations to comply with guidelines and regulations.

“We are not out to throw people out of business. All we are saying is do the right thing, follow the right procedure, particularly with the ongoing fight against corruption in the country,” he said.