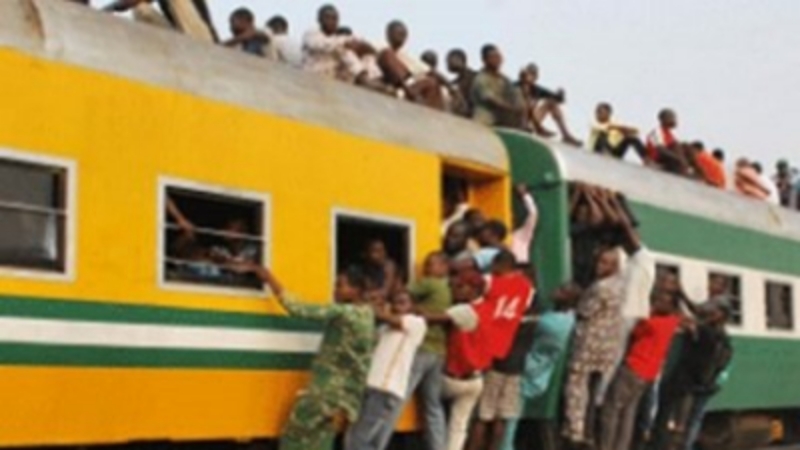 Commuters have been warned by the Nigerian Railway Corporation (NRC) on Thursday that they should desist from unsafe conducts especially riding or sitting on the roof of a moving train.

This warning was given by the Railway Corporation at the resumption of its Lagos-Ogun mass transit service.

Recall that the corporation suspended its service last year September as a result of the ongoing construction of the Lagos-Ibadan Standard Rail Line.

According to NAN report, the NRC Lagos District Manager, Mr. Jerry Oche gave the warning in Lagos and insisted that safety remained a primary concern of the corporation.

He said the corporation was aware that the available trains and coaches would not meet the demand of the commuters, adding that commuters should be safety conscious.

Oche said: “I will advise that the first thing everybody should think of is safety as we commence operations.

“We have been away for a few months, but commuters should not risk their lives because they want to board this train.

“It is when you are alive that you think of moving around. If the train is filled up, do not sit on the roof because it is risky.

“Train is still about the cheapest and the most convenient, but life has no duplicate and nothing is comparable to life. If anybody climbs on top of coaches and anything happens to such, there is no hope again.”

He said when train is filled up, commuters should look for an alternative, rather than taking risks.

Oche said that an intending passenger, who discovered after ticket purchase that the train had been filled up, had a right to return the ticket for refund.

The manager, however, said that the corporation was working hard to increase frequency.

“The current government is interested; there will be more rolling stocks even on the narrow gauge. If you cannot join the train because it is filled up, look for another means,” he said.

NAN reports that Oche, who announced the resumption on Wednesday, had said that the operation, which resumed with one return trip daily from Kajola in Ogun State to Iddo in Lagos, will involve a train of 14 coaches with 92 seats each.

The manager added that the train would leave Kajola in Ogun at 6am for Iddo in Lagos and would depart Lagos for Kajola at 5:30pm daily.

According to him, the reason the corporation is doing only one trip includes the fact that it needs to do some trials on the tracks that have just been done.

He noted that construction of standard gauge rail line was ongoing, adding that level crossing points were not fully ready.

The corporation had informed its customers that the train service would resume on November 15, 2019, but could not effect the resumption.