The shocking news of the death of Basketball legend Kobe Bryant caused buzz on the internet with all lovers of the game and the legend trooping in to their social media pages to drop comment and pay tribute to the legend who was killed on Sunday morning, January 26, in an helicopter crash alongside his 13 year-old daughter Gianna and other passengers.

One of those who have reacted to the death of Kobe is the former Peoples Democratic Party, PDP, presidential candidate, Atiku Abubakar.

Reacting to his death, Atiku recalled that Kobe redefined the game of basketball for all to watch.

“Kobe redefined the beautiful game of basketball for all of us. Rest In Peace, legend. -AA” 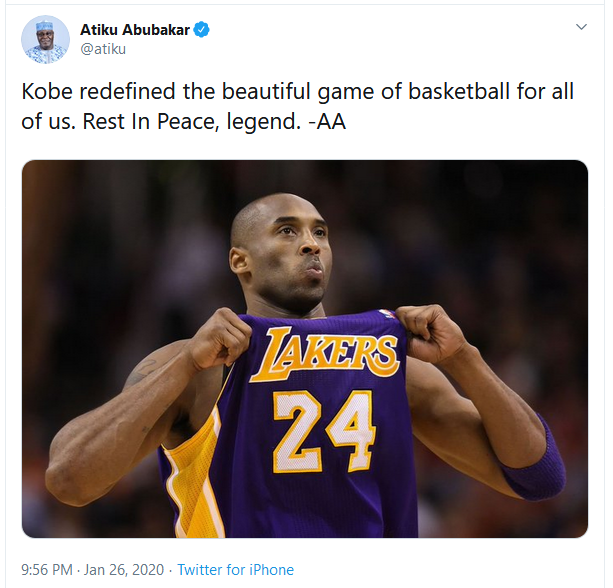 Kobe was traveling on Sunday with at least 9 other people in his private helicopter when his helicopter went down and fire broke out.

Kobe’s daughter, Gianna Maria was also reported to have been on board the helicopter and died alongside her father in the crash in Calabasas on Sunday, TMZ Sports had confirmed.

Kobe, who used a helicopter to travel for years, was known for commuting from Newport Beach, CA to the STAPLES Center in DTLA in his Sikorsky S-76 chopper. As tributes continue to flood in, we also join in mourning the great Kobe Bryant.