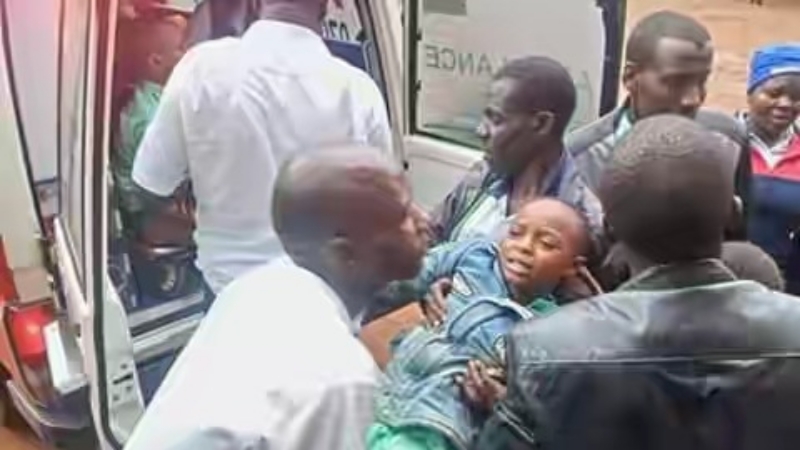 14 pupils killed, 39 injured in a stampede at their primary school in Kenya

Tragedy struck in Kenya community as fourteen (14) pupils lost their lives and no fewer than 39 were severely injured in a stampede at Kakamega Primary School, northwest of Nairobi on Monday.

Reacting to the tragic incident, the Western Region Police Commander, Peris Kimani confirmed the report and disclosed that 20 were treated at the county’s general and referral hospital and discharged.

According to report, pupils mostly aged between 10 and 12, are said to have been crushed as they ran down a narrow staircase at Kakamega Primary School after lessons.

One mother claims the children were running away from teachers who were beating them while other reports suggested the staircase had collapsed.

Some of the children were said to have fallen from the third floor of the building during the crush at around 5pm on Monday.

Distressing scenes showed parents collapsing in grief after identifying their children’s bodies in a local hospital.

Responders including police and personnel from the Kenya Red Cross Society went to the school to offer emergency services.

Leaders and security chiefs were among those who went to the hospital after receiving reports of the incident. They included Kakamega Governor Wycliffe Oparanya, Lurambi member of Parliament Titus Khamala and County Commissioner Pauline Dola.

Via Twitter, Deputy President William Ruto said, “We are devastated by the tragedy … our prayers, love and thoughts to the families and relatives of the victims of the misfortune.”

Also on the social media platform, Orange Democratic Movement leader Raila Odinga sent a condolence message in which he described the incident as “unfortunate and regrettable”.

“I wish a quick recovery to the injured children and pray that God grant strength to the affected families,” he said.

He added, “There must be an immediate and thorough probe to get to the bottom of this incident.”