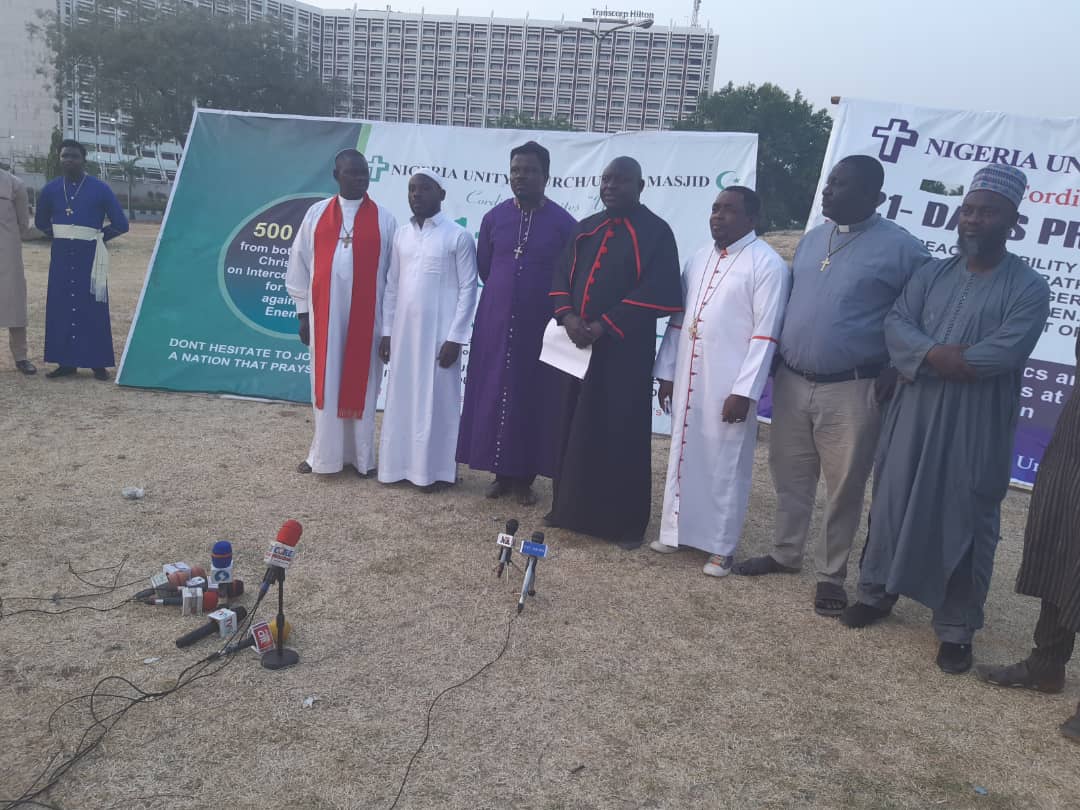 The National Inter-Faith and Religious Organization for Peace (NIFROP) has expressed gratitude to God over a failed explosion attempt at a Living Faith Church in Kaduna on Sunday, as an impending religious war was averted.

A potential tragedy was avoided on Sunday in Sabon Tasha, Chikun Local Government Area after a suspected suicide bomber Nathaniel Samuel was arrested.

The lone bomber was reportedly spotted by the Close Circuit Camera Television (CCTV) of the church, according to the security officers, Samuel was accosted and handed over to the police at the Sabon Tasha Divisional Police Station.

And NIFROP, which recently commissioned a 21-day fasting and prayer for the nation’s peaceful coexistence said Nathaniel’s capture is an evidence that God answers prayers and assurance that enemies of the country will be exposed.

In a statement signed by Rev. Dr. Jeremiah Abutu , its Coordinating Secretary General, the inter-faith group condemned the incident which would have led into national mourning and fingers pointed at wrong quarters.

According to NIFROP, the nation is indeed on the path to greatness owing to the fact that President Muhammadu Buhari is God’s anointed choice.

The group, however, advised religious leaders in the country to quit the silence only because Nathaniel is Christian.

Warm Calvary Greetings to you all from the National Inter-Faith and Religious for Peace in Nigeria.

As a background, the National Inter-Faith and Religious Organization for Peace in Nigeria is a congregation of religious adherents from different religious groups in Nigeria with a common goal of uniting in our diversity to promoting peaceful coexistence and unity in Nigeria.

As an organization, we have been in the vanguard of preaching the gospel of peaceful coexistence amongst Nigerians regardless of our religious and ethnic affiliations and this much we have strived to achieve as evident in our numerous programmes and events that have brought together Christians and Muslims faithful’s under one roof in prayers and supplication for the unity and peace in Nigeria.

We are constrained to call this press conference to put issues in proper perspective concerning the unfortunate incident that was recorded in Kaduna state-Nigeria, where a supposed Christian faithful and former member of a Church attempted to detonate an improvised explosive device in a Church with over 1000 worshipers during a Sunday service.

This act is despicable as well as condemnable in the light that had the mission been successful; Nigeria would have been thrown into mourning of phenomenal proportion, and accusing fingers would have been pointed in the wrong direction, which would further heighten religious hostilities in the country. We thank God.

We are gathered here to thank God for averting such national tragedy and to state that God indeed has vindicated us as our prayers and supplication for God to continue to expose the forces of darkness that have plotted to cause a crisis in the country.

As an organization, we have consistently stated in numerous forums that no religion encourages violence and no religion encourages the taking of lives under whatever guise, and this is one of the victories that God is giving to the Church in the sense that united we can always defeat the forces of darkness that have conspired to destabilize Nigeria.

We must state that the more significant problem is not this despicable act of attempting to bomb a Church, but the fact that most religious leaders in the country are not sincere enough to condemn this act because Nathaniel Samuel is a Christian. They have elected to shy away from the bitter truth of condemning this act. However, instead they have chosen to play to the gallery and also attempt to shift blames all in a bid to change the narrative.

The National Inter-Faith and Religious Organizations for Peace is not in the habit of shying from the truth because we know for certain that the devil is neither a Christian nor a Muslim. What is evil is evil in both Christianity and Islam.

We are grateful to God almighty for indeed putting the enemies of Nigeria to shame by giving us this great victory against the evil ones that have vowed to hide under cover of religion to perpetrate evil against the people, and after that, blame the crisis they sponsored on governments inadequacies to tackle insecurity in the country.

We consequently wish to state that this revelation is just the tip of the iceberg as it has been revealed that in the fullness of time, the forces of darkness in Nigeria shall be exposed and put to shame.

As an organization, we have prayed and fasted for days and nights for God’s intervention in Nigeria. The revelations we received from these prayers and supplications are beginning to yield fruit, and we are grateful to the Most High who sits on the throne.

The National Inter-Faith and Religious Organizations for Peace wishes to state that at its recently concluded 21-day marathon fasting and prayers programme, it was revealed that the biggest victory for Nigeria against these agents of darkness would come after February 15 and the world will see the real faces of those behind Boko Haram for he would bring disgrace to their doorsteps. They shall be no hiding place for them anymore as God has declared that enough is indeed enough for these agents of darkness fighting for the soul of Nigeria.

The National Inter-Faith and Religious Organization for Peace would not relent in its prayers and supplication to God for his continued protection of Nigeria from those that plotting evil against it. We consequently wish to appreciate our numerous members that cut across the Christian and Muslim Communities from all the states in Nigeria for the great efforts in praying for Nigeria, and they should be assured that our prayers and supplications shall not be in vain.

The general public may also wish to be informed that Nigeria is indeed on that path to greatness because President Muhammadu Buhari is God’s anointed for Nigeria, and all those that have conspired against him shall be visited with shame in Jesus Name.

We thank you for your time, and may God continue to bless Nigeria.