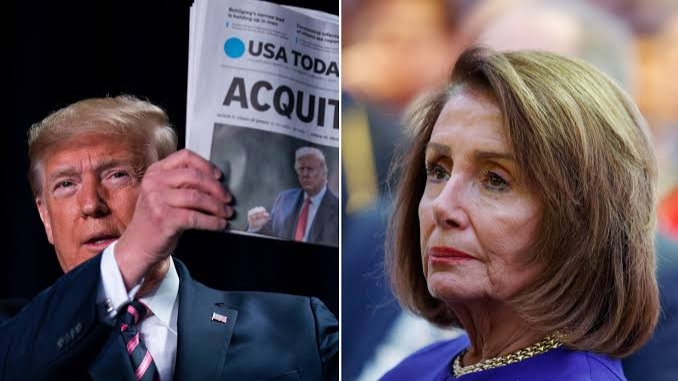 Trump and Nancy Pelosi attack each other over ‘faith, prayers and dignity’

A new phase of post impeachment drama has started between US House Speaker Nancy Pelosi and President Donald Trump after the impeachment proceedings orchestrated by the House Democrats did not scale through.

US House Speaker Nancy Pelosi and President Donald Trump have started a new phase of post impeachment drama after Trump this week survived the Democrats attempt to impeach him.

The post impeachment drama started at the National Prayer Breakfast on Thursday which both Trump and Pelosi attended where Trump thanked “courageous Republican politicians who had the wisdom, fortitude and strength to do what everyone knows was right.”

“I don’t like people who use their faith as justification for doing what they know is wrong nor do I like people who say, ‘I pray for you,’ when they know that’s not so. So many people have been hurt and we can’t let that go on,” Trump said.

“We have allies, we have enemies, sometimes the allies are enemies but we just don’t know it. But we’re changing all that,” Trump later remarked.

While celebrating his acquittal from impeachment allegations by the US senate in the White House on Thursday, Trump slammed the impeachment process as something that should never happen to another president, saying Nancy Pelosi ‘never prayed for him’, contrary to her suggestions that she did.

Trump’s lawyers to US senate: You lack jurisdiction to remove…

House will proceed with efforts to impeach Trump ‘with…

He suggested Pelosi had no dignity for tearing up his speech at the State of the Union address while apologizing to his family for letting them pass through the impeachment process.

Reacting to the Trump’s comment about her, Pelosi said she didn’t need a lesson on dignity from Trump and further added that she tore Trump’s speech because it was filled with lies, and that she still prayed for the president.

Later Thursday after the breakfast, Pelosi adressed Trump’s remark about faith as justification for doing something wrong “completely inappropriate” and “particularly without class.”, saying the president’s remarks at a faith gathering was completely unwarranted.

“This morning the President said when people use faith as an excuse to do … bad things … was just so completely inappropriate, especially at a prayer breakfast,” Pelosi said at her weekly news conference.

“I don’t know what the President understands about prayer or people who do pray, but we do pray for the United States of America,” she said. “I pray hard for him because he’s so off the track of the Constitution, our values, our country.”

“He really needs our prayers, so he can say whatever he wants … but I do pray for him and I do so sincerely and without anguish,” Pelosi added.

“To go into the stock market and raising up (the newspaper) and mischaracterizing other peoples’ motivation, he’s talking about things he knows little about — faith and prayer,” she said.

The back and forth between the number one and number three person in the US, brings to the forefront the great polarisation and partisanship that the impeachment drama has brought to the American people as they head to the polls in November.