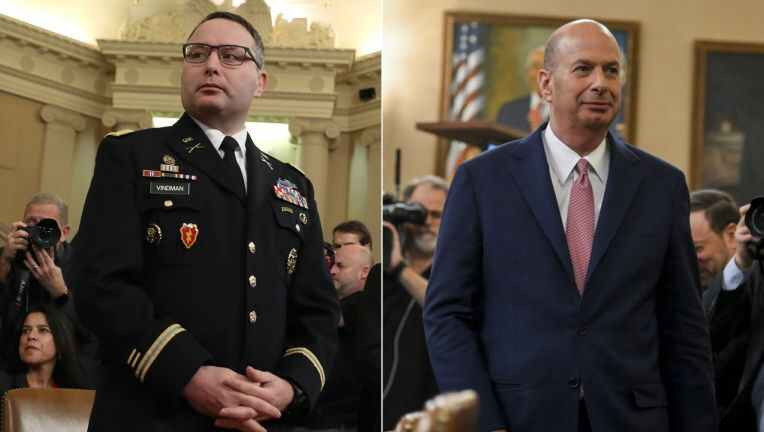 Barely three days after US President Donald Trump was acquitted by the US Senate on charges of Abuse of office and Obstruction of congress, Donald Trump has sacked EU Ambassador Gordon Sondland, National Security council member Lt. Colonel Alexander Vindman and Vindman’s twin brother Yevgeny Vindman, a National Security Council attorney for their involvements during the impeachment inquiry.

In a statement released by Ambassador to the EU on Friday night, Sondland disclosed that he has been removed from his job ‘effective’ immediately while war hero Lt. Colonel Alexander Vindman and his twin Yevgeny Vindman were sacked and escorted from the White House on Friday.

All three men played major roles in the House of Reps impeachment inquiry against Trump and it is expected that Senator Mitt Romney will be Trump’s next target after he was the only Republican who voted to remove the Commander-in-Chief from office during a Senate vote on Wednesday.

‘Today, Lieutenant Colonel Alexander Vindman was escorted out of the White House where he has dutifully served his country and his President’.

‘He does so having spoken publicly once, and only pursuant to a subpoena from the United States Congress.’

‘There is no question in the mind of any American why this man’s job is over, why this country now has one less soldier serving it at the White House,’

“LTC Vindman was asked to leave for telling the truth. His honour, his commitment to right, frightened the powerful.

“The truth has cost LTC Alexander Vindman his job, his career, and his privacy.

“The most powerful man in the world – buoyed by the silent, the pliable, and the complicit – has decided to exact revenge.”

Sondland also confirmed that he is being recalled from his post in a statement he released on Friday February 7.

”I was advised today that the president intends to recall me effective immediately’.

‘I am grateful to President Trump for having given me the opportunity to serve, to Secretary Pompeo for his consistent support, and to the exceptional and dedicated professionals at the U.S. Mission to the European Union.

‘I am proud of our accomplishments. Our work here has been the highlight of my career.’

Donald Trump’s son, Donald Trump Jr tweeted about the sack on Friday night saying, ‘Allow me a moment to thank—and this may be a bit of a surprise—Adam Schiff. Were it not for his crack investigation skills, @realDonaldTrump might have had a tougher time unearthing who all needed to be fired. Thanks, Adam #FullOfSchiff’.

Vindman who was awarded a Purple Heart for his service in Iraq after being wounded in an IED attack and still carries shrapnel from the attack in his body, was on the July 25 phone call between Trump and Ukrainian President Volodymyr Zelensky, and testifying in November during the impeachment inquiry said;

‘I was concerned by the call. I did not think it was proper to demand that a foreign government investigate a U.S. citizen, and I was worried about the implications for the U.S. Government’s support of Ukraine. I realized that if Ukraine pursued an investigation into the Bidens and Burisma, it would likely be interpreted as a partisan play which would undoubtedly result in Ukraine losing the bipartisan support it has thus far maintained. This would all undermine U.S. national security,’ he told House investigators.

Earlier on Friday, Trump admitted he was not happy with Vindman while speaking to reporters.

The beating from my husband almost killed me, Mercy Aigbe reveals why she left her marriage

Coronavirus: President Trump suspends all flights to US from Europe except UK and…