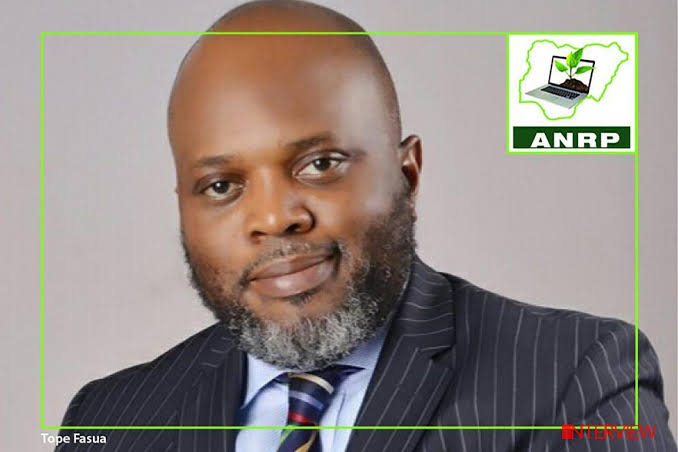 Deregistering our party after collecting N1m is a breach of contract, says ANRP Chairman Tope Fasua

Following the de-registration of political parties by the Independent National Electoral Commission (INEC), the National Chairman and 2019 Presidential candidate of the Abundant Nigeria Renewal Party (ANRP), Mr Tope Fasua has described the de-registration as a breach of contract.

Recall that the electoral body (INEC) announced on Thursday that the de-registration of 74 parties including the ANRP, saying the action followed an assessment of the parties after the 2019 general election.

In a statement released by ANRP, Fasua stated that a contract was established when INEC collected N1 million from the affected parties and asked them to proceed with their activities.

“It is apparent that INEC is in breach of a contract. By accepting our initial, non-refundable deposit of N1 million each, and asking us, based on documents to proceed and establish some structures, we as political parties enter into a contract with INEC,” he said.

“The contract terms must not be varied without our knowledge and consent (except if we are operating what Nnamdi Kanu in all his infamy, calls a zoo). There has to be avenues by which we can make this point, and those avenues will be explored even though I have seen and heard INEC boast about how they are not perturbed by cases in court after all they have so many. This itself is unfortunate, because it is a show of lack of confidence in the judiciary as a whole when a government agency flaunts the incompetence and corruptibility of a whole judiciary.

“What INEC should know is that the many parties that people formed with their own money offered some form of catharsis, a release, in the political space. People were able to express themselves politically and feel like part of the political evolution of their own country, rather than give up, accept servility and slavery, and look for a corner to crawl into just to die – or to hit back at society through crime.

“On the 3rd of December 2019, INEC paid us an impromptu visit at ANRP. We had just a few days to leave everything and show up. Our state chairmen, as part of our National EXCO, dumped everything they were doing and came to Abuja. We spent an untold amount of money. In all, over 30 of our National EXCO members showed up, risking life and limb from places like Zamfara, Borno, Gombe, Katsina, Oyo, Ogun, Lagos. We were elated that we met all the requirements of INEC – including presentation of our statement of accounts, membership register, list of assets, evidence of rent of office and what have you.

“But INEC had made up its mind. From that point on, it was radio silence. On no occasion were we invited to explain what we planned to do. No assessment was made of the quality of people that we paraded. It was sheer impunity. Nigerians have now got used to government slapping them black and blue. But at ANRP we shall prove to INEC that we are not charlatans. Our party is made up of people who have jobs and businesses and the costs of the run around that INEC has subjected us to – including huge investments we have incurred under the impression that our contract with that body will be upheld, must be recovered.”

Fasua said his party would explore legal option and this would be done jointly with others.

“This is sheer injustice, impunity, reckless, and a stab at the heart of honest young and not-so-young Nigerians who are tired of playing third class citizens in their own country, watching by the sidelines and arguing away on social media as their country pines away. They have done nothing wrong by investing their sweat, tears and blood in their own beloved nation. Sacrifice to motherland can never be outlawed. And a people cannot be corralled by force into joining gangs (egbekegbe) that they are not desirous of belonging to,” he said.

Fasua alleged INEC of dancing to the tune of the power that be, which according to him wants no new party to grow.