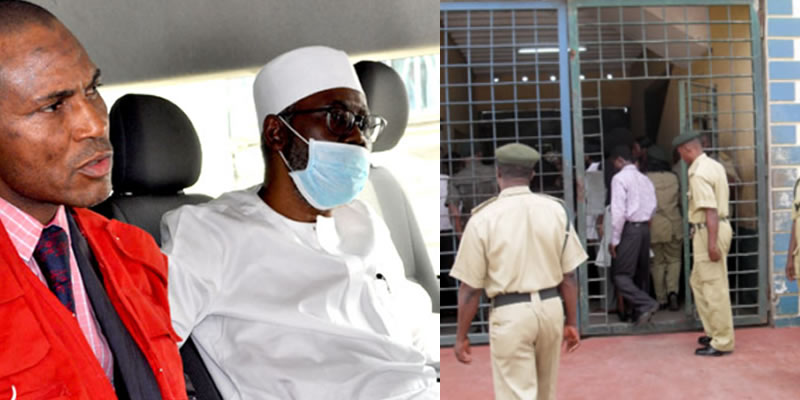 The immediate past Attorney-General of the Federation and Minister of Justice, Mohammed Adoke, SAN, on Monday, begged the Federal High Court in Abuja to remand him at Kuje Correctional Center instead of leaving him in custody of the Economic and Financial Crimes Commission, EFCC.

The former AGF who was re-arrested shortly after he perfected the bail conditions that were handed to him by the High Court of the Federal Capital Territory at Gwagwalada, made the application after he pleaded not guilty to a fresh seven-count money laundering charge that was preferred against him by the anti-graft agency.

He was docked alongside his co-defendant, Aliyu Abubakar, who was accused of paying dollar equivalent of N300million into the ex-AGF’s bank account in September 2013, in breach of the Money Laundering (Prohibition) Act.

The duo, who are also co-defendants in the charge before the Gwagwalada high court bordering on alleged roles they played in the controversial $1.1billion Malabu oil deal, urged the court to release them on bail, pending the determination of the case against them.

Arguing his bail application, Adoke, through his lawyer, Chief Mike Ozekhome, SAN, told the court that he was brought for arraignment straight from the Federal Medical Centre in Jabi Abuja, where he was admitted for treatment.

He pleaded the court to grant him bail on liberal terms, saying he would however wish to be remanded in the the Kuje Correctional Centre, instead of the custody of the EFCC.

Ozekhome told the court that his client voluntarily returned to the country from the United Arab Emirate.

“There is his statement attached to show that he returned to the country voluntarily.

“He did not run away. We have attached an exhibit to show that he went for his Masters’ study abroad.

“We have deposed to the affidavit about his health conditions. The prosecution themselves brought him to court from the Federal Medical Centre near Jabi in Abuja, this morning.

“We also plead that he be taken to the Kuje Correction Centre, a euphemism for Kuje prison pending when he meets his bail conditions to avoid the mental psychological strictures he goes through in the custody of the EFCC.

“My lord we pray that he be granted bail in liberal and affordable terms and conditions so that he can take care of himself.

“My lord as you can see, the first defendant who is less than 60 is already bent with age”, Ozekhome submitted.

Earlier, the prosecution lawyer, Mr. Bala Sanga, applied for the defendants to be allowed to remain in custody of the EFCC.

Trial Justice Binta Nyako stood down the proceeding till 2pm to enable the court to rule on the defendants bail applications.