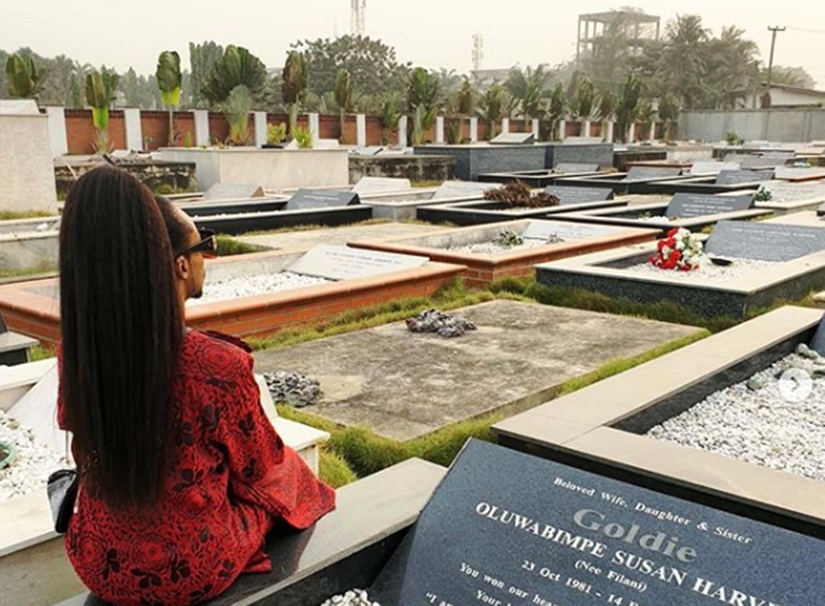 Award winning TV host, popularly referred to as Denrele, has decided to spent his Valentine’s Day, yearly at the graveside of his late friend, Susan Oluwabimpe, popularly known as “Goldie” Harvey, who died exactly 7 years ago

The music star was buried on 25 February 2013, at Vaults & Gardens, Lagos where her friend Denlere has made his Valentine’s Day destination.

On Valentine’s Day, Denrele was at the graveyard of his dear friend. He also penned down a tribute.

” 7 YEARS AND STILL COUNTING! I am shattered that we had to lose OLUWABIMPE SUSAN HARVEY nee FILANI aka GOLDIE at such a young age. We won’t be able to share secrets, travel to places where I would outpace her with my unbridled energy and groan at her for lagging behind, grow older and wiser together, have deep conversations, celebrate more of her milestones such as her future MUSIC Accomplishments and Accolades, vacations to Bali, Barbados and other places she wanted to visit so bad!”
He continued: “I know all of us at some point, felt this pain and loss and we move through grief at our own paces. But I want this to be a celebration of her life, which exemplified ambition, laughter and perseverance. She never ever gave up when faced with challenges that were thrown her way, and she never let me do so either. She would have wanted all of us to live our lives to the fullest to honour her memory.We had such a phenomenal run together even though GOLDIE left us way too early. She left without pain and regrets. She left as a pure, determined and strong-hearted woman! Here’s to GOLDIE singing and dancing to Aerosmith’s “Don’t Wanna Miss A Thing”, watching too much rom coms and the Crime & Investigation Channel, taking on Fashion risks like no other, leading the charge and going above and beyond with her Music Videos and Performances, and being the #BossBitch that we all remember her as!If I pause for a bit, I can feel her presence around me, guiding me to be at my best. With so much love and compassion around us, it’s like her soul remains with us. I’m pretty sure she’s up there blowing minds already. GOLDIE left us when she was young and wild, bright and bold, and we will meet again in the stars.”

Denrele Edun who was with Goldie during her last minute on earth added, “For those of you who have experienced loss in any way, shape or manner… KNOW THIS: Things do get better!Reach for your spirituality and allow your higher self to lead you through the challenges in life, bringing you to the level of success you deserve!”