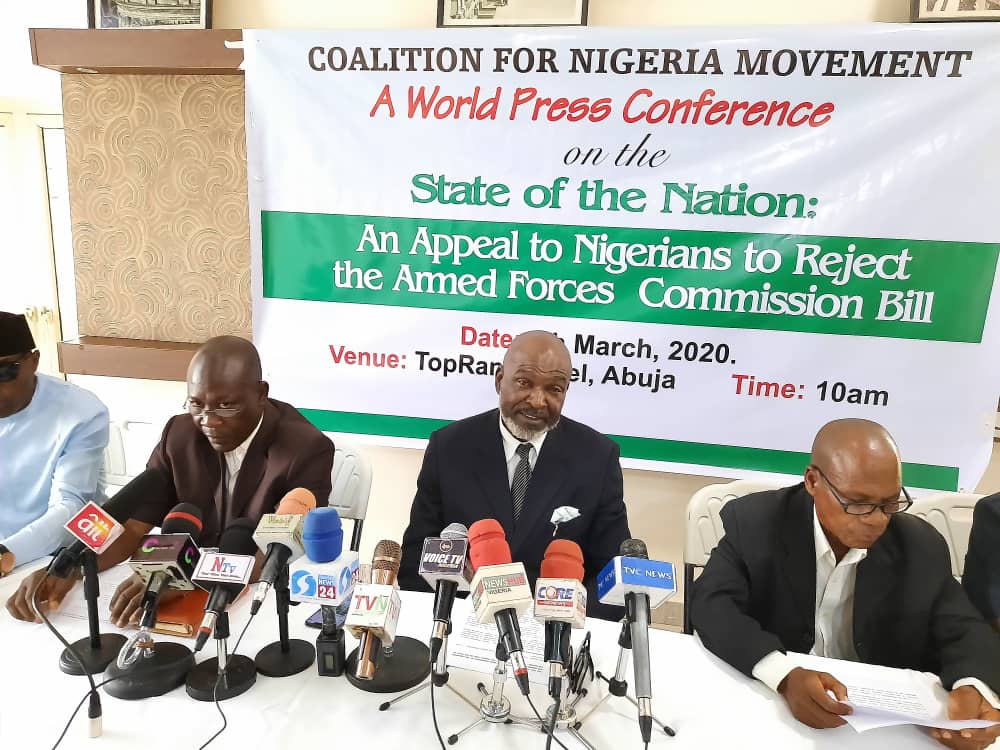 The Coalition for Nigeria Movement (CNM) has called on Nigerians to reject the Senate’s proposed bill on the Armed Forces Service Commission, describing it as a “taboo”.

CNM made this known at a press conference on Monday in Abuja, adding that it is unconstitutional for the National Assembly to propose such bill.

Sponsored by the lawmaker representing Abia-South Senatorial District, Senator Enyinnaya Abaribe, the bill will give the Senate authority to appoint Chief of Defence Staff, Chief of Army Staff, Chief of Air Staff, Chief of Naval Staff, Director of Military Intelligence and heads of other arm-bearing security agencies.

The bill will also provide for the establishment of Armed Forces Service Commission, which shall have the power and authority pursuant to section 219 of the 1999 Constitution of the Federal Republic of Nigeria (as amended).

Speaking on behalf of the group, National President, Mr. Sabo Ode argued that Abaribe and his cohorts would have to ammend the constitution for this to happen.

In clear terms, the coalition rubbished the bill to be “repugnant to the principles of democracy; a satanic wish to curtail the powers of Mr. President on security matters, and a despicable plot to hamstrung the Presidency”.

The coalition, however, called on Nigerians to rise and defend their democracy and not allow selfish politicians manipulate the constitution in their favour. 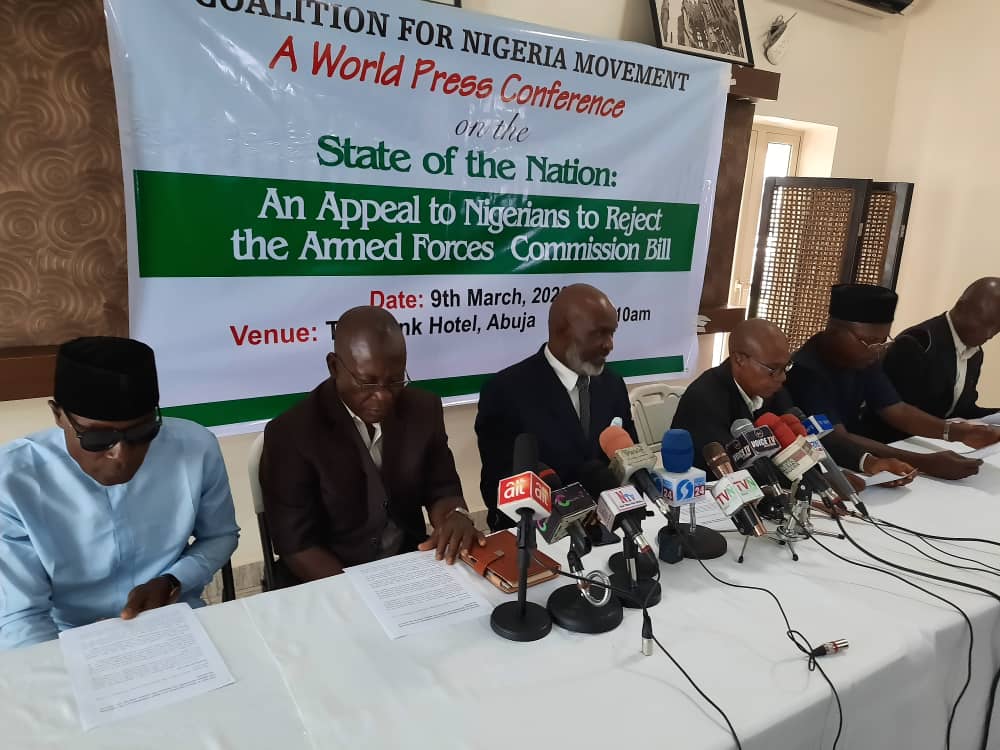 The Coalition for Nigeria Movement (CNM) is deeply displeased with the apparently very shameful, directionless and fuzzy outings of the 9th National Assembly (NASS) in recent times. CNM is overly piqued with the Senate popularly known as the Red Chamber which is ordinarily supposed to be populated by experienced elder statesmen and patriots filled with wisdom, but playing infantile tricks on Nigeria.

We expect that Nigeria’s parliamentarians should lead the trajectory of redeeming our checkered country from the tottering tenterhooks of development deficiency, deprivation of the citizenry, mass poverty, hunger and disease. But rather and very resentfully, our lawmakers at the National Assembly and the Senate in particular have rather preferred to embark on senseless voyages in the pretext of legislations.

This Coalition is extremely worried that most times these accidental politicians who have found themselves in the national parliament are not only barren of ideas, but devoid of the basic skills, wisdom and procedures of legislation that would meaningfully ginger national development and progress.

But instead of devoting their time to acquaint themselves with the barebones, they are in a haste to impress their constituents and gullible Nigerians by playing to the gallery. There is a vexatious craze of sponsoring absolutely very useless Motions and Bills currently at the National Assembly.

It is not the responsibility of our Coalition or the civil society to educate members of the National Aseembly on their elementary roles as national legislators. But we cannot restrain our emotions in bemoaning the fact that these men and women want Nigerians to believe they don’t know the supremacy of our Constitution and the limits of their interference with it through Bills and Acts emanating therefrom.

Nigerians cannot pretend aloofness on certain issues. The 1999 Constitution of Nigeria (as amended) spells out clearly areas that the National Assembly is empowered by the same supreme document to make laws. And majority of these parliamentarians are conversant with the cliché recited like national anthem everywhere that any law which contradicts the Constitution of Nigeria is null and void to the extent of the contradiction.

This Coalition is therefore appalled at the foolishness which informed Abia state’s Senator Enyinnaya Abaribe’s wisdom to float the so-called Bill branded as the Armed Forces Service Commission (establishment) Act 2020. We are even more consternated that other Senators who should know better that Sen. Abaribe is embarking on a senseless voyage, sat back and endorsed an obviously worthless piece of legislation to proceed to the stage of second reading in the Senate. We want to believe that if the 104 members of the Senate were in their slumber at that point, the rest of our over 200 million citizens cannot be fooled at the same time.

That Senator Abaribe relied on Section 219 of the 1999 Constitution of Nigeria, but aligned its intendment wrongly gives us a serious cause for concern and not to remain silent. And so, it is obvious that the Senators are attempting to wrest the powers of Mr. President in deciding who makes up the list of his Service and Security Chiefs through the backdoor.

We wish to elucidate that the 1999 Constitution of Nigeria which Sen. Abaribe and his co-travellers relied upon to smuggle a Bill very obnoxious to the interest of Nigeria states is Section 219. But Sections 217 and 218 of the same Constitution have already settled the supremacy of Mr. President in deciding who to appoint into Service Chiefs leadership, in compliance with the Federal Character Principle. And Federal Character principle is also not same as ethnic or religious character.

Section 219; Sub-section (b) states that “With respect to the powers exercisable by the President under section 218 of this Constitution, by an Act, established a body which shall comprise such members as the National Assembly may determine, and which shall have power to ensure that the composition of the armed forces of the Federation shall reflect the federal character of Nigeria in the manner prescribed in the section 217 of this Constitution.”

However, Section 217: sub-section 3; earlier stipulated that “The composition of the officer corps and other ranks of the armed forces of the Federation shall reflect the Federal Character of Nigeria.”

The Coalition wishes to explain that the phrase in the clause (218) stating that “…as may be established by an Act of the National Assembly,” refers directly to the Armed Forces of Nigeria as may be determined or approved by NASS. It does not suggest the enactment of a fresh law which will whittle or usurp the powers of Mr. President in deciding who to appoint into the hierarchy of Service Chiefs.

In other words, the Section 219 of the 1999 constitution (as amended), as cited by the sponsor of the Armed Forces Commission Bill, Senator Abaribe does not confer such powers on the National Assembly. If NASS finds provisions of Sections 217 and 218 defectives, it must first amend the relevant sections of the 1999 Constitution or may be riding against the tide by this Bill.

The Coalition for Nigeria Move finds it pertinent to caution that the Senate should avoid its planned instigation of Constitutional crisis through the contents of a Bill which seeks to undermine the powers of Mr. President on appointment of Service Chiefs. Mr. President is the Chief Security Officer of Nigeria and takes responsibility over every act of security breach which is of national dimension. It is illogical to severe such powers and reside it in another organ or body as contemplated by this repulsive Bill.

We deem this so- called Bill by the National Assembly repugnant to the principles of democracy; a satanic wish to curtail the powers of Mr. President on security matters, and a despicable plot to hamstrung the Presidency. No country contemplates it. It is indisputably, a planned attempt to stage a coup against the spirit and intendment of the Constitution of Nigeria and an invitation to anarchy in the country.

This Coalition of eminent and patriotic citizens consequently implores all patriots everywhere in Nigeria and abroad to rise against the Bill and its contents. It is narcissist, anti-democratic and a prelude to chaos and breach of public law and order.

The same aberration echoed same week in the House of Representatives. A fresher in the House, Hon. Benjamin Mzondo from Benue State introduced a Bill seeking to raise the educational qualification into the office of the President and Governor of a state alone.

However, there is Constitutional uniformity in the least prescribed educational qualification for all elected office seekers from State Assembly members to President. By provisions of the Constitution, the discrepancy on qualification is only on age limit or differentials. But while the NASS feels a President and a Governor should have a higher educational qualification, our ever greedy national parliamentarians feel it is not necessary for them. So, they excluded themselves from the proposed Act. That’s the hypocrisy!

Section 131 of the constitution states that a person only qualifies for election into the office of the President of Nigeria if among others things, “they have been educated up to at least school certificate level or its equivalent”. This stipulation applies to all elective offices, except local councils which laws are made by state independent electoral commissions.

But today, the National Assembly is contemplating a Bill which will raise the educational qualification for some aspirants into elected offices, without amending the necessary sections/clauses in the constitution that pegs it to a minimum of school certificate. These are laws which create ambiguity of interpretation by Justices when issues morph into litigations before the courts. Both chambers of the National Assembly should think and act better than its current obvious groping in the dark.

We therefore wish to stay in unmistakn terms that the Bill is a taboo that must be rejected by all Nigerians and the National Assembly must be put on notice that no anti- people law will be allowed to see the light of the day in any chamber of NASS.

A word is enough for the wise.

Thank you and God bless you all..