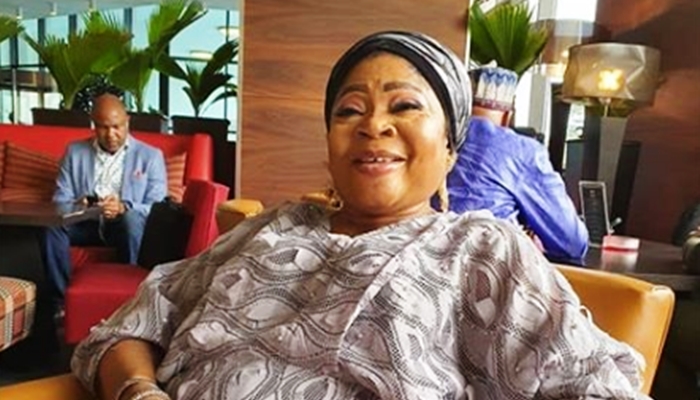 Nigerian veteran singer, Salawa Abeni who some days raised alarm about a blackmailer, that was threatening to release her old “nude photos”, speaks on the reasons she decided to release them herself.

Recall that the popular singer, days ago, shared screenshots of her chats with the blackmailer, revealing that the man who identified himself as Jason and a resident of Osun state was threatening to tarnish her image and destroy her career of over 45 years.

However, in a bid to thwart his attempts, the musician released the photos herself.

Abeni, speaking with Saturday Beats, disclosed why she courageously released her own nude photos.

“Firstly, I am not a child. I cannot even recall where that photo was taken. I’m not sure whether I was even in the hospital or with my partner. It must have been taken more than 20 years ago. I’ll be 60 next year and I have spent 46 years on stage, so for anyone to decide to blackmail me in this critical time when the world is on lockdown, battling the coronavirus pandemic; that is bad. So, since the person threatened to release the photo, I decided to ‘help’ him by posting the photo online myself.

“Whenever I travel abroad, I am treated importantly. So, why should someone be threatening me with blackmail in my own country? He was asking me to negotiate with him; that after I made the payment, he would make a video of himself burning the pictures. I put all the conversation we had online.

“There’s nothing in the world I wouldn’t do for you”, Simi…

“Is nudity that sacred? I gave birth four times and I exposed my nakedness to the doctors and nurses at those times. There was nothing for me to be scared of. I have God and people behind me.

She also noted that she was overwhelmed with the support she had got from Nigerians. She said, “I don’t even know how to thank Nigerians and people from across the world. I always knew that people loved Salawa but I didn’t know it was this much. Since the time I put the picture online, people have been calling me non-stop. People have been cursing the person and calling him on my behalf. Many people regard me as a legend and they felt I shouldn’t be treated that way. On my Instagram page, I had over 1,000 comments.”

Speaking on if the blackmailer had contacted her after she put the pictures online, the Waka exponent said, “If you were the one, would you have contacted me after what I did? He doesn’t even pick his calls anymore because a lot of people have been calling him. If you call the number, it is identified as ‘Scammer’ by a popular caller identifying App.”

Abeni went on to speak about reporting the case to the police, “I have made a complaint to the police and they are working on it at the moment. I am confident that the Nigeria Police will arrest him. Even before I made a formal report to the police, some people had reported the case on my behalf.”

Salawa also said she wasn’t ruling out the fact that an insider could have leaked the photos to the blackmailer. She added, “It is said that if the enemy within does not get one, the one outside cannot get one. We should only pray that God should save us from those watching us that we are not aware of. I am a human being and I am entitled to my privacy.”

Lending some words of advice to other entertainers that could be in similar situations in the future, the ‘Orin Tuntun’ singer said, “People stood up for me and that further strengthened me. Anybody who is faced with such situation should go public about it so people can rally round them to fight the ‘enemy’. It could happen to a man or woman. Things like this have happened in the past and it will likely continue to happen.”