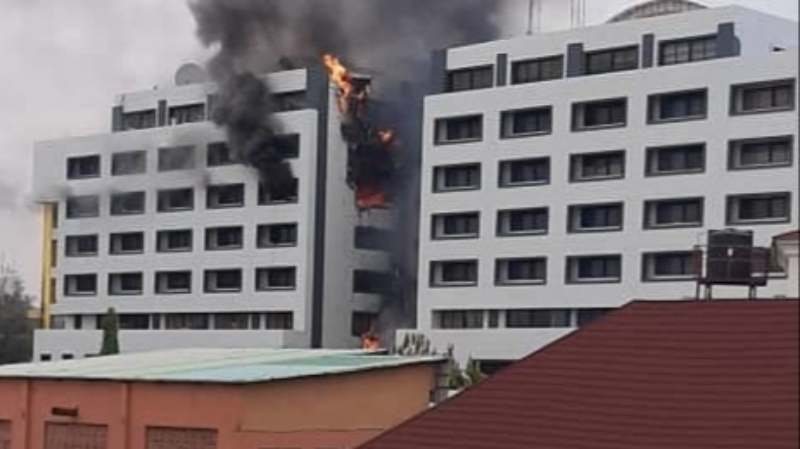 The Federal Fire Service on Wednesday put out the fire that gutted the top floors of the Office of the Accountant General of the Federation (Treasury House) Central District Area of the Federal Capital Territory, FCT, Abuja.

The AGF building is located beside the FCT Police Command and the Nigeria Security Printing and Minting Company, NSPMC.

The Fire Federal Service which was about some 300 metres to the building, according to eye witness account, were able to mobilize their equipment and personnel into the area and brought the situation under control.

The immediate cause of the fire incident could not be ascertained as workers and staff of the Treasury House were observing the restriction order imposed by the government to curtail the spread of Coronavirus in the FCT.

Eye witnesses said the fire started from the third floor, razing the building upwards before the personnel of the Federal Fire Service came to the rescue.

The public Relations Officer of the FFS, Sandra Ugo told journalists that personnel of the FFS arrived on time and were able to put out the fire before much damage was done to the building.

“We have successfully extinguished the fire outbreak at the AGF office,” she said.

Ugo declined to comment on what could have ignited the fire but noted that the good thing is that the incident had been put under control in less than one hour.