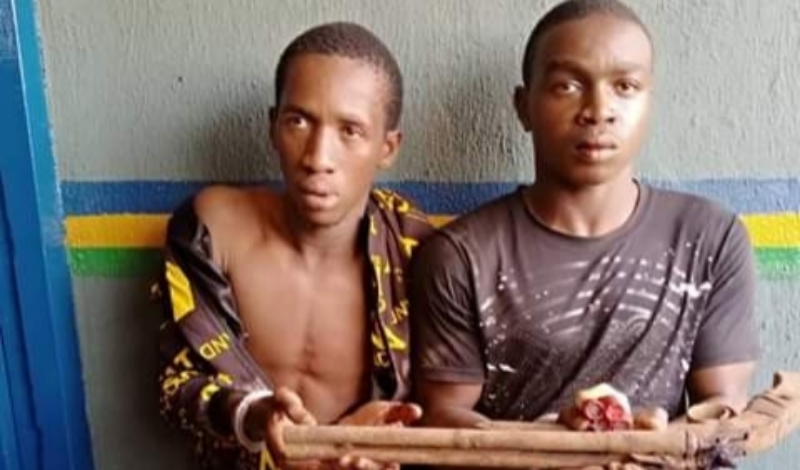 Police in Ogun have arrested two suspected cultists for allegedly killing a member of the Oodua People’s Congress (OPC) identified as Kolawole Ajomale.

WITHIN NIGERIA learnt that the suspects identified as Korede Pariosho and Jide Afolabi were arrested on Wednesday by detectives from Ijebu-Igbo division following complaints against them.

According to report, the suspects allegedly shot the deceased on the head and stomach on Sunday April 5, at his 20, Odo Balogun Street Oke Sapen residence where they attacked him.

According to the police, the suspects allegedly murdered the deceased in the presence of his pregnant wife and then went into hiding.

The Divisional Police Officer (DPO) reportedly led his men to the hideout where the suspects were apprehended upon receiving the report.

Reacting to the tragic incident, the Police Public Relations in the state, Abimbola Oyeyemi confirmed the arrest.

Oyeyemi said that the suspects admitted to have killed the deceased to retaliate the murder of one of their members killed by OPC in 2017.

“On interrogation, the two suspects confessed killing the deceased but they claimed to have done it in revenge of the death of one member of their cult group whom they alleged was killed by OPC men in 2017. They further confessed to have vowed since then that any member of OPC seen will be killed in vengeance of the death of their late colleague.

“The Commissioner of Police, Kenneth Ebrimson has ordered the immediate transfer of the suspects to homicide section of the State Criminal Investigation and Intelligence Department (SCIID) for discreet investigation and prosecution.” Oyeyemi added