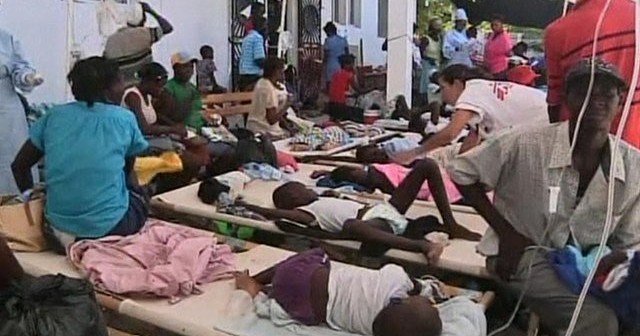 Reports of double figure deaths in the recent cholera outbreak in Ebonyi state have been debunked by the State Government.

This was contained in a statement released by the Commissioner for Health, Daniel Umezuruike in Abakaliki, the Capital of Ebonyi state.

The Commissioner said that only one death was recorded.

He said that 68 persons were successful treated and discharged in Ameku, Okposhi in Ngbo, Ohaukwu local government area of Ebonyi state where the outbreak was recorded.

He said the late patient was a woman while his son who reported to the hospital with severe case of the infection has recovered.

There were conflicting rumours on the casualties in the disease.

A rumour had it that 20 persons died in while others mentioned 13 and 10 deaths.

But the State Government, at the weekend, said only one death involving a woman was recorded in the outbreak of cholera in the community.

Umezurike said he visited the Health Centre in the community to ascertain developments on the cholera outbreak.

He said the 68 persons that were admitted in the health post have been treated and discharged, stating no case of the disease has been recorded again in the community.

According to him: “In Ameku,  Okposi Ward 11, Ohaukwu local government area of Ebonyi state where we have an outbreak of cholera that has affected 68 people. So f”ar, all the patients have been successfully managed and discharged home, the only person that died was the index case that was brought from another village where someone is said to be a patent medicine dealer and he attends to people and the mother was staying with him and all of a sudden, they reported that the mother died and they brought her to their village and buried.

“Few hours after the burial, so many indigenes of the village started having abdominal discomfort, vomiting and diarrhea. So many of them were affected at the same time. Immediately we were alerted, we sent advanced team headed by the state Epidemiologist, WHO and other partners who went there and met 20 people on admission and of that time, about 38 people were affected.

He blamed the outbreak on poor hygiene by the people of the area who he noted still practice open defecation.

“I visited the affected community and no single person is still sick but we carried out health education and public awareness campaign to discourage open defecation. We found out that the main health issue they have is that they don’t have toilet facilities in that community.

“Their source of water is good which is borehole. The people were happy with our interventions and subsequent visit and promised to construct VIP toilets in all the families by themselves while government will help to upgrade the health post in their area to a Primary Health Centre status.”

The commissioner debunked some media reports that people were dying in droves as a result of Lassa Fever outbreak.

He disclosed that only two persons died of Lassa Fever this year contrary to reports that the disease killed 15 persons.

“With respect to lassa fever, we have managed a total of 85 cases this year in Ebonyi state and unfortunately, we lost two people due to late presentation.

“At present, all the patients that suffered lassa fever this year have been discharged in  the virology centre built by our Governor in Alex Ekwueme Federal University Teaching Hospital Abakaliki(AE-FUTHA) and this is verifiable.

“If people are dying in droves in Ebonyi state, we would have still been having patients in the virology centre ”, the Commissioner said.