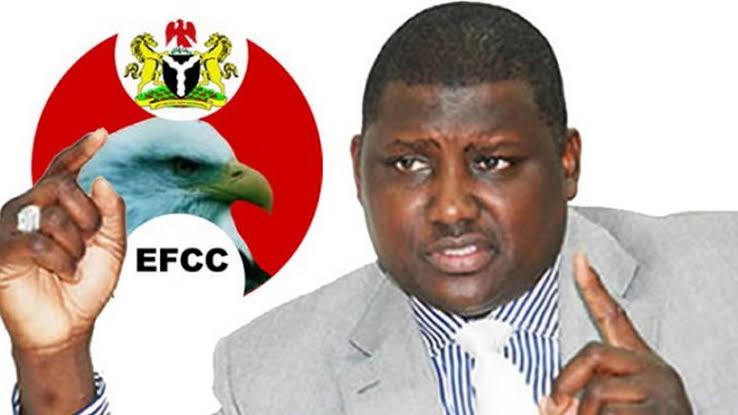 A Federal High Court in Abuja has rejected the request by the Economic and Financial Crime Commission (EFCC) for the revocation of the bail granted Chairman of the defunct Pension Reform Task Team (PRTT), Abdulrasheed Maina.

The court also declined the request by Maina for a further variation of the conditions attached to the bail granted him on November 26, 2019.

These decisions are contained in two rulings delivered on Wednesday by Justice Okon Abang in two applications by the EFCC and Maina.

The first ruling was on a motion on notice in which the EFCC sought the revocation of the bail granted him on the grounds that Maina, being tried on money laundering related charges, had allegedly perfected plan to escape from custody and assassinate the prosecuting lawyer and prosecution’s witnesses.

Justice Abang held that it was premature for the court to take a definite position on the issue because there is evidence before the court that the allegation by the prosecution have been established by any security agency.

The judge said the request to revoke Maina’s bail could not be granted at this stage because he believes that investigation of the allegations has not been concluded since Maina claimed he has not been questioned by any security agency on the issue.

“No matter the gravity of the allegation against the 1st defendant (Maina), it remains allegations, not yet proved.

“Should the court proceed to grant the prosecution’s request, it will amount to denying the defendant fair hearing when the investigation was still on and the defendant had not been heard on the issue.

“I have no option than to believe the 1st defendant that security agencies have not heard from him.

“There is no proof before the court that the defendant has threatened the life of the prosecution counsel and his witnesses,” the judge said.

He rejected the EFCC’s request for an order directing that additional security be provided around Maina, currently being held at the Kuje correctional centre, Abuja.

Justice Abang noted that, since the Executive arm controls all the security agencies and the prosecuting agency, it could easily provide additional security if it feels such measure was necessary, without any order of the court.

“This application, at this stage, to the extent that investigations are yet to be concluded, is incompetent. It is not that it lacked merit.

“Whether it lacked merit or not cannot be determined at this stage, because investigation is still on, the defendant having not been heard by security agents on the allegations,” the judge said, and proceeded to strike out the application for being incompetent.

In the second ruling, Justice Abang rejected the request by Maina for further review of the conditions attached to the bail granted him on November 26, 2019.

Maina said he has been unable to meet the conditions attached to the bail, because of the stringent nature of the conditions, which included that he produce a serving Senator.

In the ruling on Wednesday, Justice Okon Abang faulted the latest application for review and held that it was unmeritorious.

Justice Abang held that the applicant was wrong to have, in his latest application, suggested some conditions to the court.

The judge said: “In an application for variation, it is not for the applicant to dictate the terms for the variation.

“It would have been sufficient for the applicant to provide sufficient reasons why the bail should be varied and why he could not meet the conditions earlier granted, not to dictate the conditions that suit him to the court.

“The condition, as dictated by the defendant, is pregnant with ulterior motive. What the 1st defendant has done is to ask the court to substitute his conditions with those earlier granted by the court.

“The 1st defendant failed to place materials before the court, with convincing reasons, to show that there exist exceptional circumstances to warrant the variation of the conditions of the bail earlier varied.

“The application filed by the 1st defendant lacks merit and is accordingly dismissed,” the judge said.