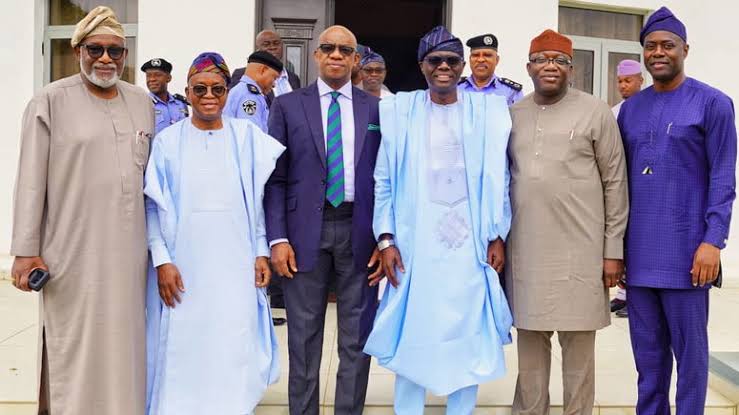 The South West Governors’ Forum on Friday said it had inaugurated the board of O’dua Investment Limited.

This was contained in a statement issued in Akure by Mr Donald Ojogo, the Commissioner for Information and Orientation in Ondo State, on behalf of the Chairman of the Forum, Gov. Oluwarotimi Akeredolu.

Akeredolu is also the governor of Ondo State.

The News Agency of Nigeria (NAN) reports that the South West Governors’ Forum has governors of Ekiti, Lagos, Ogun, Ondo, Osun and Oyo States as members.

NAN also reports that the previous board was dissolved on April 16 by the six governors.

The governors said that the inauguration among others was the thrust of a virtual meeting held on May 7 by the six governors and presided over by Akeredolu.

The governors, who expressed confidence in the individual capabilities of the board members, said that the choices were made after a careful consideration of their wealth of experience, integrity and deep knowledge of the business environment.

They charged the board to reposition and restructure the organisation to foster a robust, transparent, accountable and forward-looking tradition that would engender enviable productivity deserving of a regional heritage.

Odu’a Investment Company Limited was incorporated in Nigeria as a Limited Liability Company in July 1976 to take over the business interests of the former Western State of Nigeria now comprising Oyo, Ogun, Ondo, Osun and Ekiti and Lagos States.

Since inception, it had been operating as a conglomerate owning substantial investment in real estate, food and beverages industries, agriculture, manufacturing, financial services, hotel and catering, telecommunication as well as printing and publishing.

The company commenced operations on Oct.1, 1976.