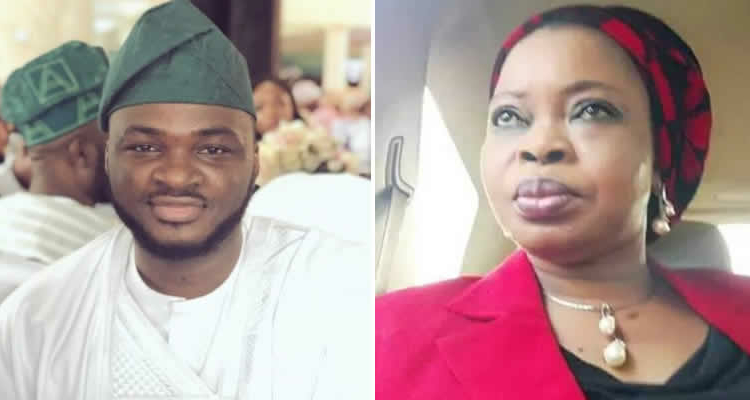 Some corrupt Civil Servants and their Allies who finds themselves in top positions that recruits into the State and Federal services usually extort from the system with ‘ghost recruitment’ in which they insert names of non-existing workers into official recruitment lists.

These masterminds of ‘ghost recruitment’ receives illegal payment on behalf of the fake names that were inserted into the official recruitment list. The son of Oyo state Government Head of Service, Amidat Agboola has been receiving backlashes following a heated conversation that exposed his alleged involvement in ‘ghost recruitment’.

Amidat’s son, identified as Ayobami Agboola’s alleged involvement in a ‘ghost job’ was made public after he and a former acquaintance, Sulaimon Adesola got into an argument over the response of Governor Seyi Makinde’s administration to the Coronavirus pandemic in Oyo state.

While Ayobami insisted that Adesola’s criticism against Makinde’s administration was because he could not secure a “ghost job” under the government, Adesola fired back by stating it was the head of service’s son who promised to use his mother’s influence to secure him a slot.

The screenshots Adesola shared to back his claim compelled Ayobami into admitting that they had the conversation. The Head of Service’s son however denied being involved in a racketeering scheme and only egged him on because he was doing a pro bono work for him.

Below are public discussions between Adesola and Ayobami, that led to claims; 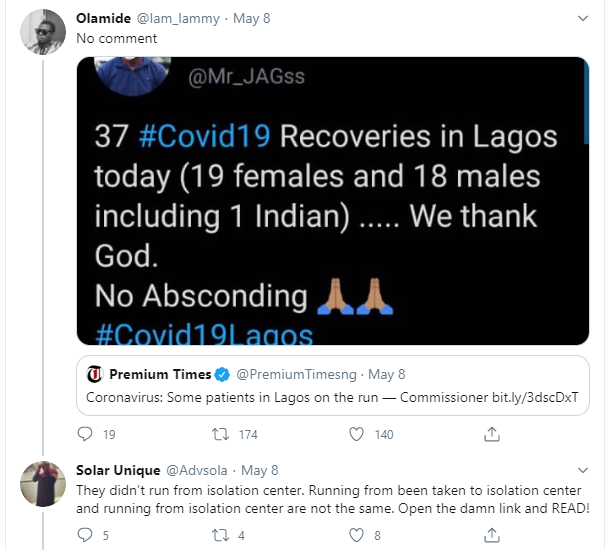 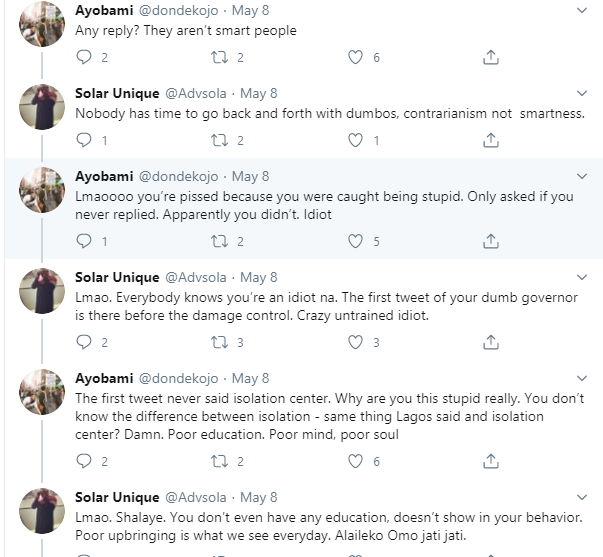 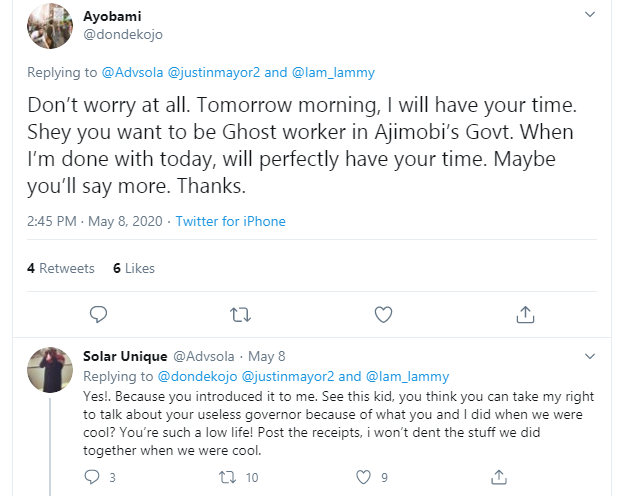 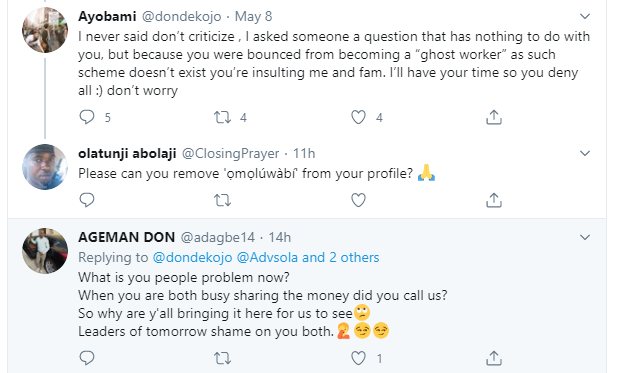 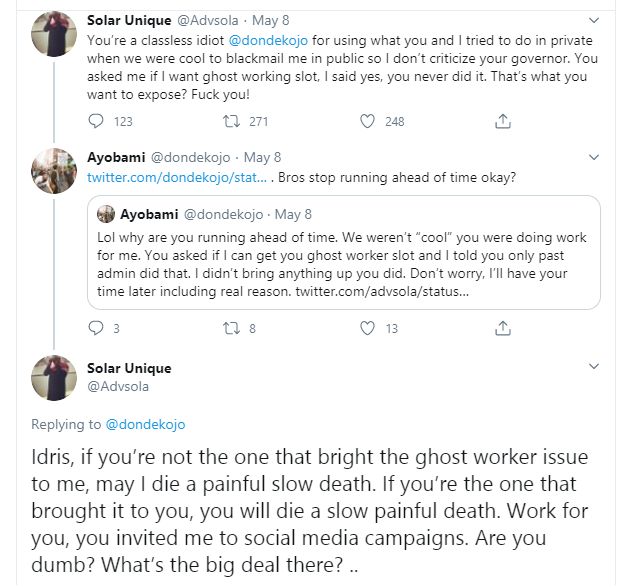 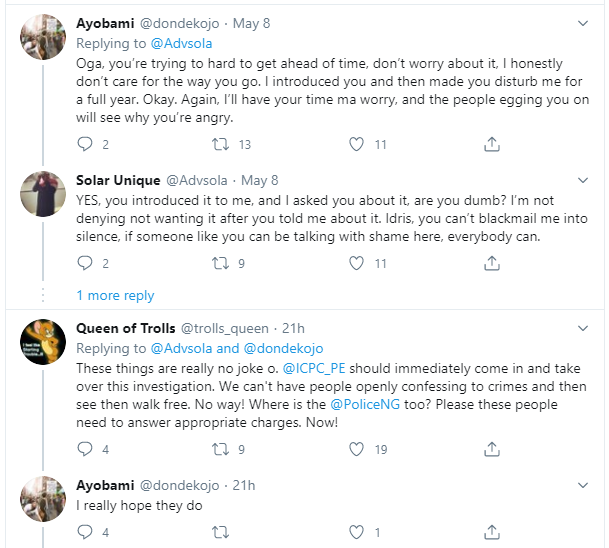 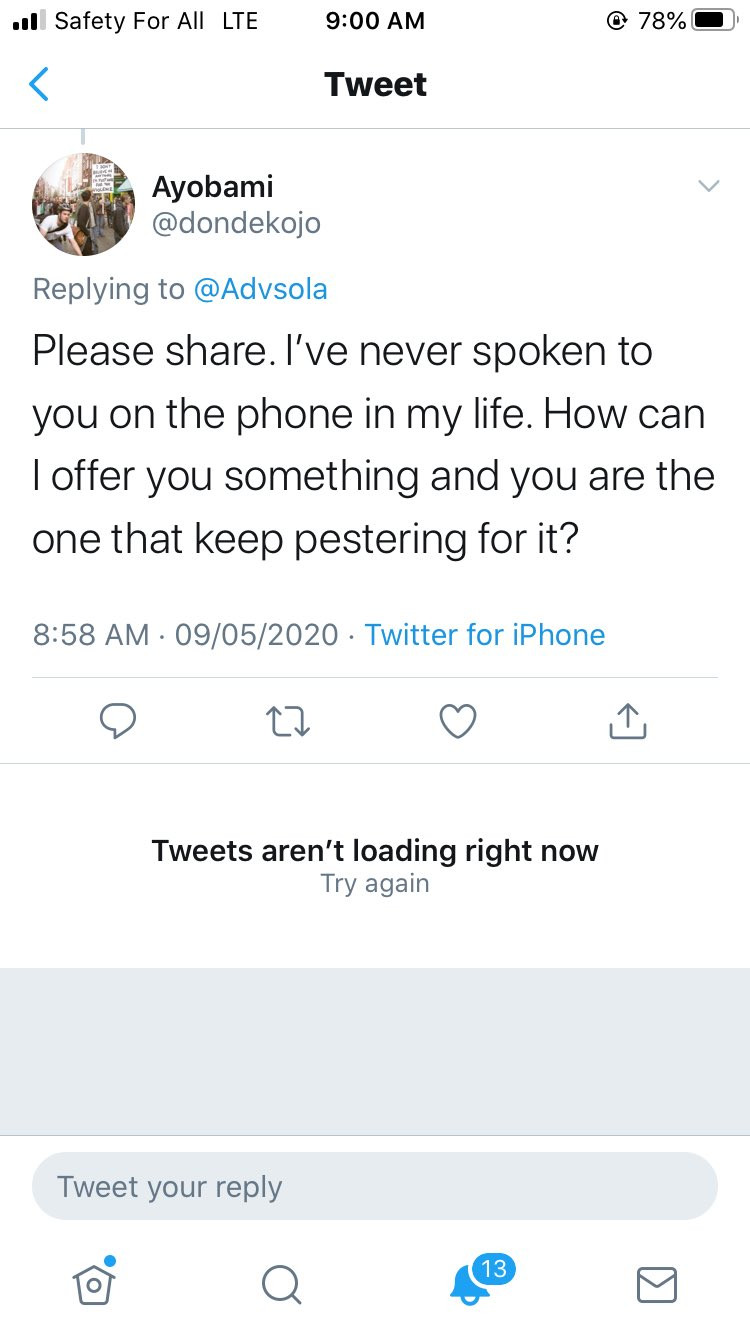 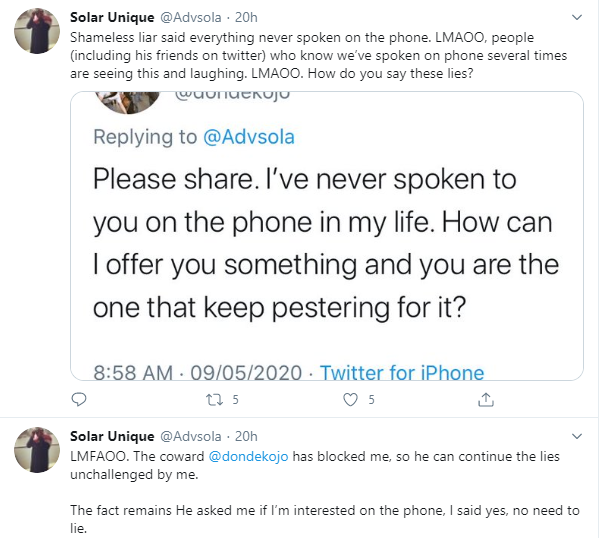 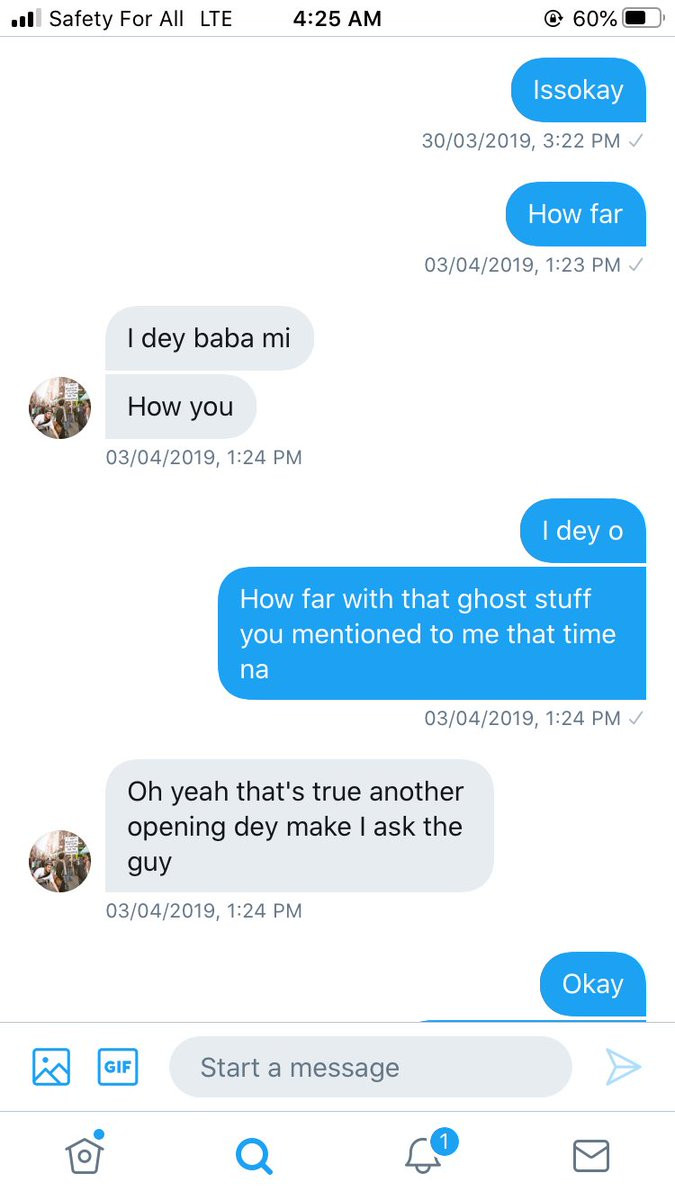 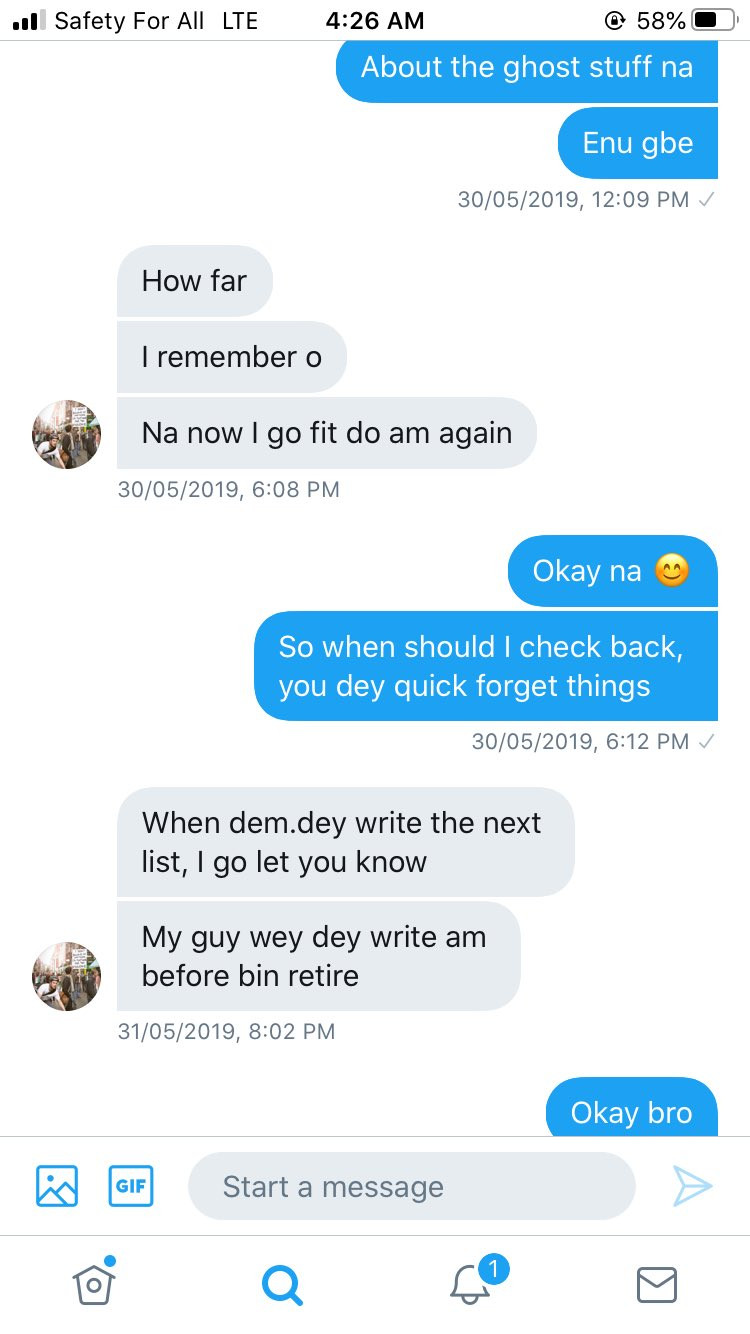 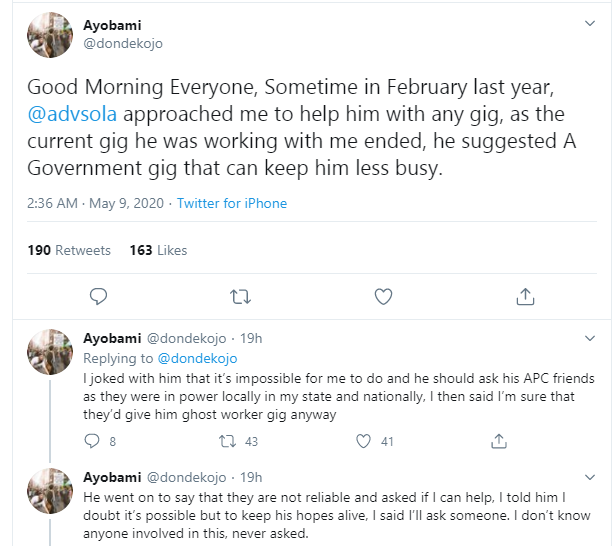 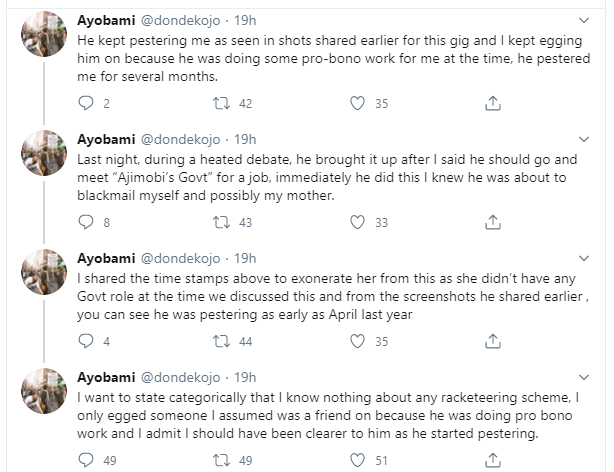 According to PREMIUM TIMES, in a Mr Agboola admitted that he truly promised Mr Adesola a “ghost worker” slot to keep him in his “team”.

“He approached me and I held him on because he was working for me. He was doing a pro-bono job for me and I wanted to keep his hope alive which he was never going to get,” he said.

“He worked on social media campaigns for me and I felt the best way to keep him happy is to promise him a job.”

Mr Agboola accused Mr Adesola of being a “political jobber” who helped to campaign in the last Oyo State governorship election. He said he made him a promise because he did not want to lose the man to another political party.