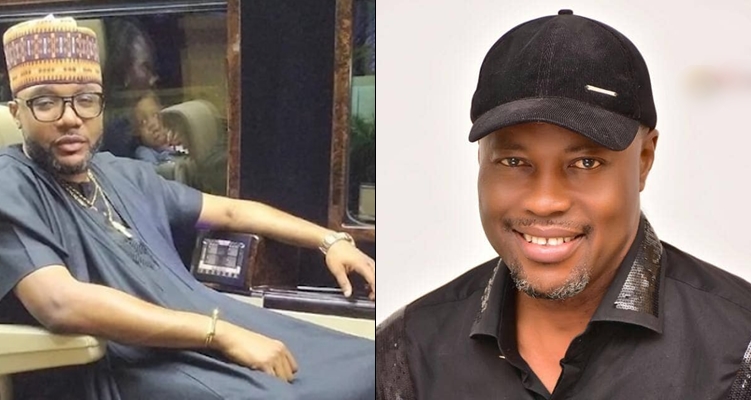 “Nobody investigates your poverty”, Tony Oneweek reacts to E-Money’s ordeal with Police

Following the order of the Inspector General of Police to probe E-Money and the unexpected withdrawal of his police escorts, Nigerian musician, Tony Oneweek has reacted.

Nigerian music mogul and businessman, Emeka Okonkwo also known as E-Money was interrogated by the police following his reported abuse and misuse of the privileges of having police escorts.

The interrogation was done following the orders of the Inspector General of Police, Mohammed Adamu at the Police Headquarters Annex, Kam Salem, Obalende, Ikoyi.

According to Punch, the music mogul was grilled for about six hours by the Inspector-General of Police, Monitoring Department on Tuesday, May 12, 2020.

E-Money is said to have come under fire by the Inspector General after it was observed that he was treating the police escorts like domestic staff.

Reacting to his probe, Tony Oneweek shared an old photo of E-Money and Kcee at a time when they were still struggling and he wrote:

NOBODY INVESTIGATES YOUR POVERTY.

Nigeria sef. When E-Money and his elder brother Kaycee Limpopo were in the street, police didn’t investigate him oooo. Now he is rich, they want to investigate his wealth. Like my brother OC Emcee said: “Nobody investigates ur poverty”.

I am happy that E-Money has the “required” Goodwill that set him free (within a few hours) from this aborted embarrassment. Emeka is a good man. He is different, benevolent and very humble. Some Igbos do not love themselves shaa. Sad to hear that E-Money’s travail was ignited by a fellow Igbo man. Na waa” 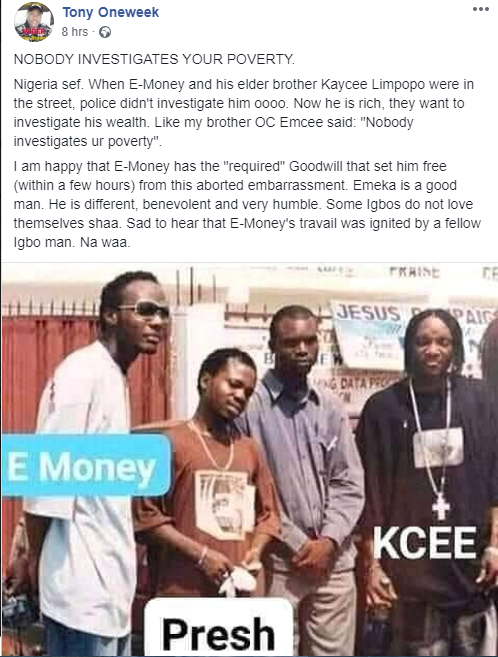