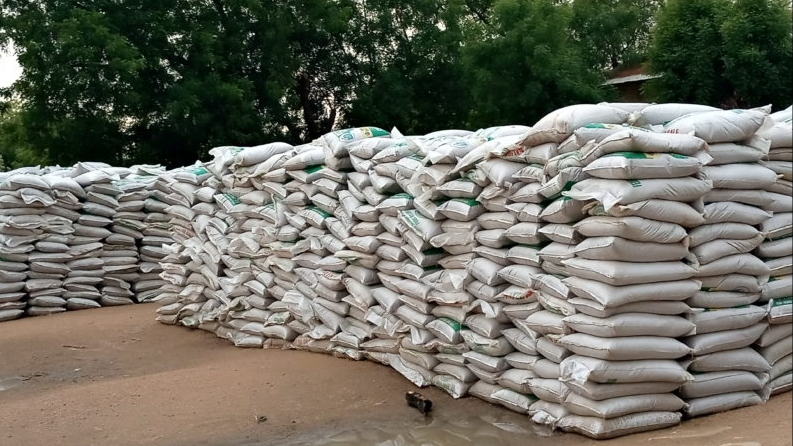 Food items delivered to Kano State Government by the Federal Government as palliatives have been reportedly neglected to rot at open space and being beaten by rain and sun.

Recall that barely two weeks ago, the Federal government delivered 110 trucks of food items to the state meant to be distributed to vulnerable and less privileged whose sources of survival are being crumbled due to lockdown directive.

The consignment was delivered by the Minister of Humanitarian Affairs, Disaster Management and Social Development Sadiya Farouq on Sunday 17th May, 2020.

According to Guardian report, the relief items worth millions of naira are still left abandoned at the warehouse of Kano Agricultural Supply Company (KASCO) premises at Farm centre without cover to prevent from any circumstantial damage.

The food items which already opened to any eventualities are being drained by three consecutive rain fall; several bags already soaked by water.

A source at the premises who regretted how the food items left rotten under the rains told newsmen that the consignment have spent more than one week unattended to.

“Many people are living hungry because they cannot go to fetch for their daily sources of livelihood. Government brought the food to assistant people but look at the items here under the rain and in the sun. How can people be starving and food meant for them left idle this is wrong”.

When contacted, Chairman of the State Fundraising Committee and Vice Chancellor, Bayero University Kano, Professor Mohammed Yahuza Bello explained that plan for the evacuation and distribution of the Federal government palliatives is slated to commence on Thursday.

Professor Bello who led the distribution of the first phase of the state owned palliatives stressed that the committee is being constraint by logistics from government which he noted is being addressed.

Although, Kano State government recently disbursed similar palliatives to 50,000 households across the 484 political wards in the state.

The palliatives being handled by the adhoc committee on COVID-19 fundraising had announced two weeks ago plan to commence the Federal government palliatives to additional 50,000 households across the 44 local government area to crushing the effect of the COVID-19 induced lockdown.