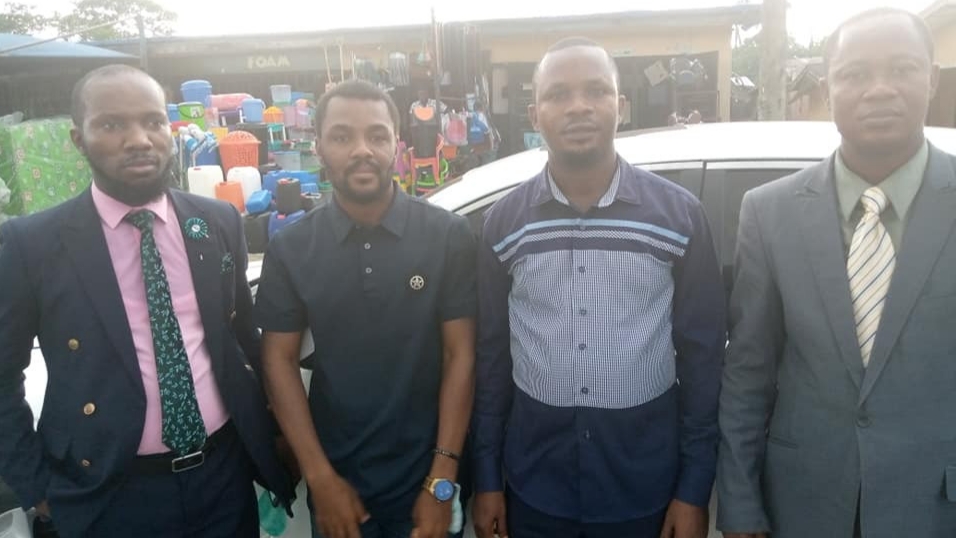 A sports journalist identified as Kufre Carter has been released by the Department of State Services following a valid and subsisting court order in Akwa Ibom.

This is coming weeks after the sports journalist was arrested by operatives of Department of State Services for allegedly making defamatory remarks against Dr. Dominic Ukpong, the Commissioner for Health in Akwa Ibom State.

The release of the sports journalist has been confirmed by lawyer and activist, Inibehe Effiiong via a Facebook post he made.

Inibebe said his client who spent one month is SSS custody was released after Director-General of the agency, Alhaji Yusuf Bichi ordered the SSS Command in Akwa Ibom State to comply with the valid and subsisting Order of the Court and release our client.

The statement reads in full;

KUFRE CARTER: THE LEPROUS FINGERS OF TYRANTS HAVE BEEN BROKEN BY THE STRONG HAND OF THE LAW

On Wednesday, 27th May, 2020 at about 3:30 p.m., our client, Kufre Carter, a sport’s journalist with XL 106.9 FM in Uyo regained freedom after spending one month in the custody of the State Security Service (SSS) at the instance and on the instigation of the Akwa Ibom State Government.

This came after the Director-General of the SSS, Alhaji Yusuf Bichi, ordered the SSS Command in Akwa Ibom State to comply with the valid and subsisting Order of the Court and release our client.

We received indication on Tuesday night that Kufre will breathe the air of freedom again.

The Akwa Ibom State Government knew, or ought to have known, that we do not fight on our knees. They knew that with us, the rule of law was not going to be sacrificed on the altar of political expediency.

The state government also knew that in cases of oppression, state sponsored terror and persecution, no amount of threat, blackmail or intimidation would make us to apologise or beg them.

Like I told the Attorney-General of Akwa Ibom State, Uwemedimo Uwoko Esq., in court when he tried to humiliate me by announcing to the hearing of lawyers in the Bar on 11th May, 2020, that Kufre had apologised to the governor, our client did not apologise to the governor as he claimed and has no reason to do so.

I also told Mr Nwoko that it is the governor who must apologise to our client. We remain unwavering in our position.

They never sought our opinion or consent. No union or association intimated us of their plan to hold a nocturnal meeting with the government over our client’s case, this is not how sincere people behave.

We are impelled to specifically state that the leadership of the Nigerian Union of Journalists (NUJ) in Akwa Ibom State did not play any useful role in the release of our client. On the contrary, the NUJ leadership played a spoiler role in their attempt to massage the insatiable ego of their friends and benefactors in government.

The Attorney-General claimed that it was the NUJ leadership that told him that they had extracted an apology from our client which he said was meant for Governor Udom Emmanuel.

That false statement from Nwoko Esq. came to us as a rude shock given that the State Chairman and Secretary of the NUJ had issued a public statement in commemoration of the recent International Press Freedom Day wherein they jointly distanced themselves from our client’s case by stating that none of their members was in custody.

We could not rationalise how the same people who disclaimed and denied our client publicly would secretly meet with the persecutors of our client to discuss undeserved apology. We hope that members of the NUJ Council in Akwa Ibom State will summon courage at their next Congress to investigate the shameful role of their leaders in this case.

Kufre Carter did not and could not have apologised to anyone.

The Akwa Ibom State Government should know by now that their usual belligerent antics of arresting, intimidating and coercing innocent citizens to apologise over critical comments has expired. They may have done that successfully in other cases, but such oppressive antics cannot work with us.

Our client is a citizen of Nigeria and not a slave. We will never be part of any unholy arrangement that diminishes the fundamental rights of our client.

While we are discomfited with the abusive deployment of the SSS by the Akwa Ibom State Government against our client, we nonetheless wish to thank the Director-General of the SSS for halting the voyage of illegality at the SSS Command in Akwa Ibom State.

We appeal to Mr Bichi to probe the illegal deployment of the SSS by the Akwa Ibom State Government to arrest our client over a purported case of defamation, which has no bearing whatsoever with it’s statutory mandate under Section 2 (3) of the National Security Agencies Act of preventing and detecting crimes against the internal security of Nigeria.

Nigerians will like to know how a purported case of “defamation of character” affects the internal security of Nigeria? This probe is necessary to forestall future abuse of the SSS by vindictive, vicious, wicked and oppressive politicians who have failed in their most basic responsibilities to the citizens.

We wish to express our profound appreciation to spirited Nigerians, the courageous members of the Fourth Estate of the Realm (the media), Amnesty International, the International Press Centre, SERAP, Peoples Alternative Fronts and other members of the civil society and the human rights community in Nigeria for their solidarity in resisting the tyrants of Akwa Ibom State.

Please note that Kufre was not released to the Civil Liberties Organisation (CLO). The. CLO has no hand in the release of our client.

It is a sad commentary that CLO will offer itself as a tool in the hands of the State Government to paint the impression that our client was released to the CLO. This is nothing but a face saving falsehood meant to deceive members of the public.

Kufre’s freedom is a reminder to us that with perseverance, devotion to justice and the rule of law, the leprous fingers of tyrants will always be broken by the strong hand of the law.

We wish to put the Akwa Ibom State Government and other necessary parties on notice that this is not the end of this matter.

Our client will seek legal redress in court over the violation of his fundamental rights, and will claim damages and public apology and ancillary reliefs.

As regards the pending criminal charge against our client at the Chief Magistrate Court, Fulga Street in Uyo, we will be meeting the state government in Court on Monday, 1st June, 2020 for trial.

History will vindicate the just.