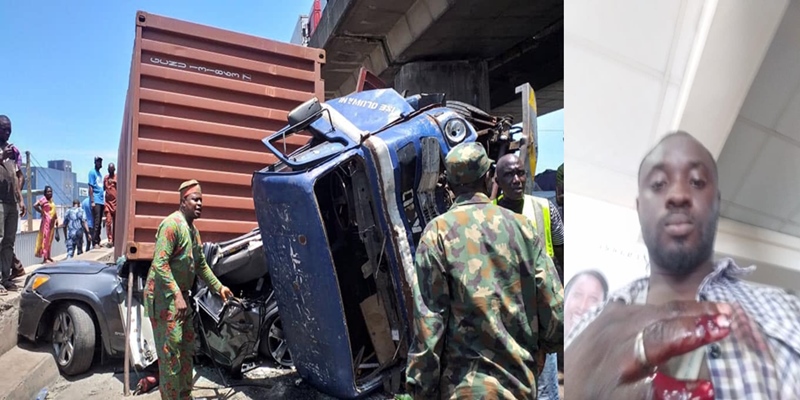 An unidentified man has taken to social media to testify and appreciate God for saving him from a near-death encounter after a trailer with a container, fell on his car.

Sharing photos from the scene of the accident, the man disclosed that the trailer fell on his car on his way from work on his second wedding anniversary. And according to him, it took almost 1 hour for people to be able to drag him out of the crashed car and at that time all he could do was to just keep calling on God to save him, until God saved his life by ‘covering him in His hands till he got out’…

It happened on the day I was to celebrate my second wedding anniversary.
I had accident, I was driving from work when container fell on the car, I spent almost 1 hour with people trying to rescue me, all I was calling was God of mfm save me,and for real God covered me in His hands till I got out, I had few bruises but nobody ever believed someone came out of the car alive,because it was totally crushed… I only had a torn finger which was due to the windscreen that broke when the container fell.
all TV station carried the news,even all blogs,no one believed it..only God can do this sir.
I want to do a Thanksgiving sir to thank God for giving me a second chance to live.