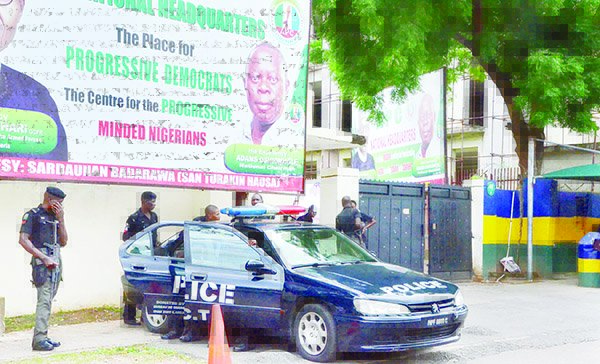 Police operatives have reportedly sealed off the National Secretariat of All Progressives Congress (APC) for the second time this week.

WITHIN NIGERIA learnt that two hilux patrol vans and two Peugeot 604 cars were stationed at strategic positions around the secretariat as early as 9am.

It was also learnt that staff of the ruling party who had arrived early were asked to move out of their offices.

According to The Nation, the seal off was at the instance of the Inspector General of Police.

The Commissioner for FCT Police Command was directed to ensure that nobody was allowed into the premises.

The Senator Abiola Ajimobi led NWC faulted the convocation of the NEC, which was described as illegal.

It said it won’t attend the NEC despite the expected presence of President Muhammadu Buhari.