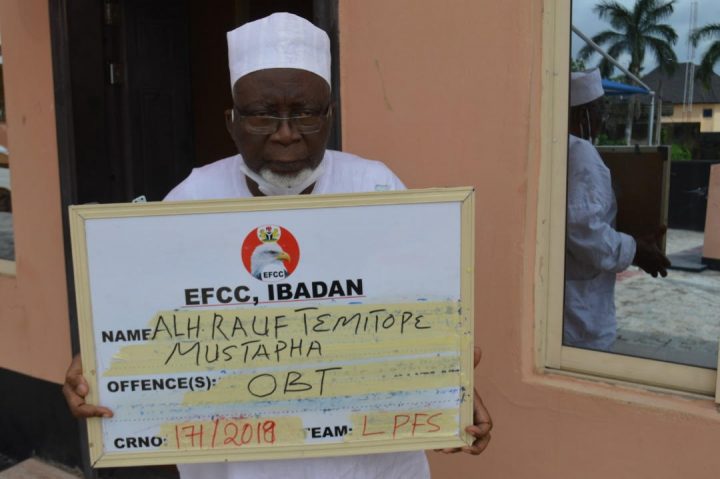 Mustapha was arraigned before Justice Ladiran Akintola of the Oyo State High Court, Ibadan on 27-count charges, bordering on obtaining by false pretence and issuance of dud cheque.

According to a release by the commission on Friday, signed by its Head, Media & Publicity, Dele Oyewale, the victim, Akibest en-Konsult Limited had alleged in a petition that the self-styled Muslim cleric collected the said sum for the procurement of 23 acres of land but failed to deliver the land.

It added that, after agreeing to refund the money, Mustapha issued a dud cheque for a first instalment refund of N3,000,000 (Three Million Naira).

One of the charges read:

“That you, Alhaji Sheik Rauf Temitope Mustapha on or about the 30th of October, 2017 within the Ibadan Judicial Division of this honourable court did issue a Stanbic IBTC Bank PLC cheque No. 00146244 dated the 31st October, 2017 in the sum of N3,000,000 to one Arkibest En-Konsult Limited in settlement of your financial obligations to them, which cheque upon presentation within three months of issuance was dishonoured by your bankers for lack of sufficient funds in the account to which it was drawn and thereby committed an offence contrary to Section 1(2)(b) of the Dishonored Cheques (offences) Act, Cap D11, Laws of Federation of Nigeria, 2014.”

The defendant, it said, pleaded not guilty to the charges, prompting prosecution counsel Dr. Ben Ubi, to ask the court for a trial date, and for the defendant to be remanded in EFCC custody pending the determination of his bail application.

The judge granted the prayer of the prosecution and adjourned hearing on the bail application till Tuesday, July 7, 2020.