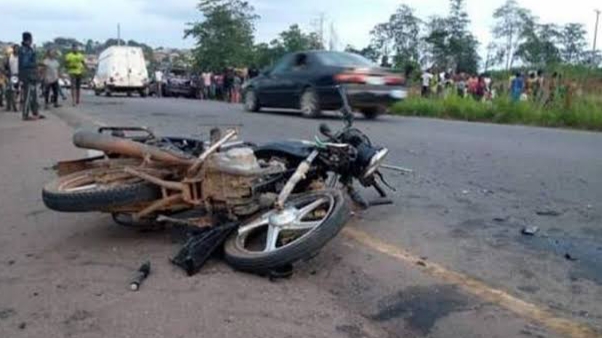 Tragedy as a vehicle along the Agbarho Bridge axis of the East West Road in Ughelli North council area of Delta state reportedly collided with a moving motorcycle, resulting to the death of the commercial motorcyclist.

WITHIN NIGERIA learnt that the tragic incident occurred at about 4pm, Monday.

It was also learnt that the commercial motorcyclist died instantly after he was hit by the vehicle, a wine coloured Mitsubishi wagon.

According to report, the driver as well as passengers in the vehicle fled immediately they saw that he was dead.

They sustained injuries and the windscreen of the vehicle was said to have been broken, sources claim.

It was gathered that the yet-to-identified okada rider allegedly rode against traffic.

Narrating the incident to newsmen, a motorist said “it happened around 4pm. The okada man was coming from Okuokoko side and was on the wrong lane. The other vehicle was coming from Ughelli.

“The man died on the spot. As the driver was still trying to maneuver, he hit the median and the glass got broken. They were injured because of the impact.”

Efforts to reach the Police Public Relations Officer in the state, DSP Onome Onowakpoyeya were futile as the PPRO did not pick calls neither did she reply any of the texts sent to her.