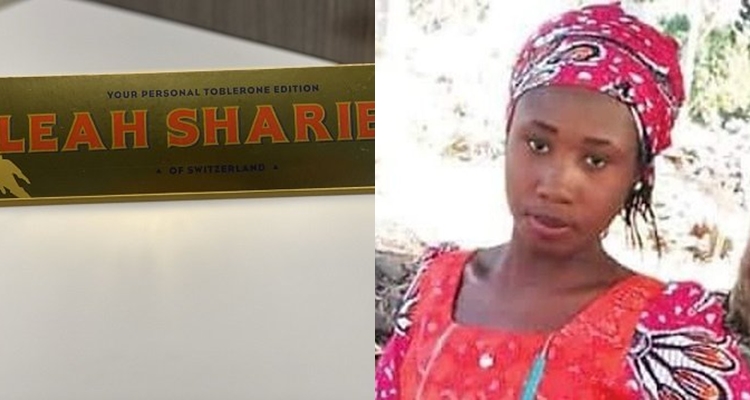 The cry for the release of Leah Sharibu continues as Toblerone, a Swiss chocolate firm, has joined calls to secure her freedom through a chocolate brand.

Leah was one of the schoolgirls kidnapped in Dapchi, a local government area (LGA) in Yobe state, more than two years ago.

Sharibu and 109 other female students, most of whom were later released, had been abducted in their school in February 2018 after Boko Haram insurgents struck and whisked them away from their hostels.

As government efforts to secure their release yielded results, the insurgents had thereafter held back Sharibu, who was 14-year-old at the time, for refusing to renounce her Christian faith.

On Friday, Reno Omokiri, an ex-aide to former President Goodluck Jonathan, took to his Twitter page to share a picture of the custom made chocolate by Toblerone while charging Nigerians to retweet amid efforts to intensify the advocacy for her release.

Please can you help retweet and comment on this custom made Leah Sharibu chocolate, made by @Toblerone of Switzerland, to let the world know that you stand with Leah, and that she is not forgotten? Leah we love you and are praying for your release!#FreeLeahSharibu #RenosNuggets pic.twitter.com/9W0prwGnGU

In July 2019, Sharibu was alleged to have been killed, with Grace, a kidnapped aid worker, pleading from Boko Haram custody that she does not want similar fate with previous victims — referencing Sharibu and Hauwa Liman — “who were killed because no one came to their rescue.”

But the federal government had refuted the claim, maintaining that she was alive and that it was doing all it could to secure her release. In January, she was reported to have given birth while in captivity.

“I wonder, do we pretend that leaving Leah behind won’t result in pregnancy?” Ahmad Salkida, a journalist with access to the insurgents, had said while speaking on her state of wellbeing.

“Since the terror group announced condemning her to slavery, is there any step or collective focus on preventing similar occurrences? She’s a mother, but I don’t know about the gender of the baby.”