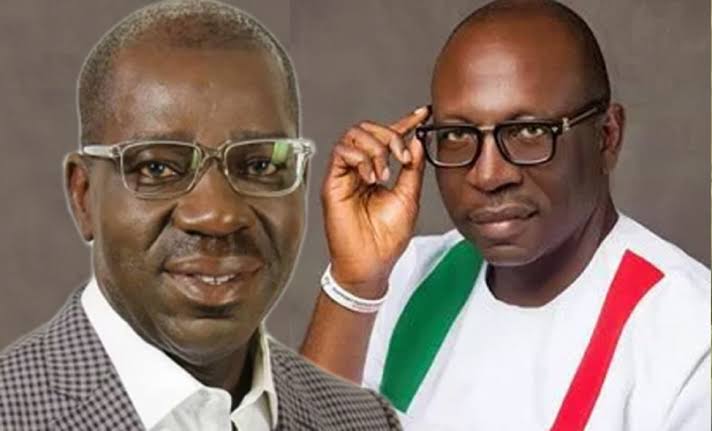 Some members of the Obaseki family have endorsed and pledged their support for the candidate of the All Progressives Congress (APC), Pastor Osagie Ize-Iyamu, in the September 19 Edo Governorship election.

The endorsement of the APC candidate by the Governor’s family came on Saturday in a meeting at Ize-Iyamu’s private residence in Benin.

This is coming following gale of Defection and resignations by Obaseki’s Aides and commissioners last week.
Victor Obaseki, a cousin of Governor Godwin Obaseki, while speaking at the meeting, admitted that although Godwin Obaseki is a kin, he won’t be getting the support of the family.

He said :”I am here today in company of my cousins to support Pastor Osagie Ize-Iyamu.

“Godwin Nogheghase Obaseki, the executive governor, is our cousin. Generally, the Obasekis have their own way of doing things; we are a different branch of faith, we are supporting our brother, Pastor Osagie Ize-Iyamu with an unalloyed support fully for him. I have supported him before, and I would continue to support him, we would do all our campaigns for him without let or hindrance, fully from the bottom of our hearts.”

On his part, Ize-Iyamu expressed his delight at the support of the Obaseki family, stressing that this serves as a confirmation of the poor administration that Godwin Obaseki has given to Edo state in the past four years.
He also praised the Obaseki family for not allowing sentiments becloud their judgement in their support for who is right to lead Edo state for the next four years.

“Let me thank you for the endorsement. I have known some of you for many years and I am very happy that politics has not strained our relationship.”
“It is true as Osaro said that far away in New York, I had the opportunity of meeting with him and other Edolites, where I shared my ambition.
Osaro has been a good gentleman and humble man, and has always declared his support.”

“He came out this morning to say, Godwin has not done well, and not because they answer the same surname, would continue to support him and go through the very poor performance that we have seen in the past four years.”

“They will not allow the sentiments or even deceit of brotherhood make them vote for somebody they know is not qualified for a position.”