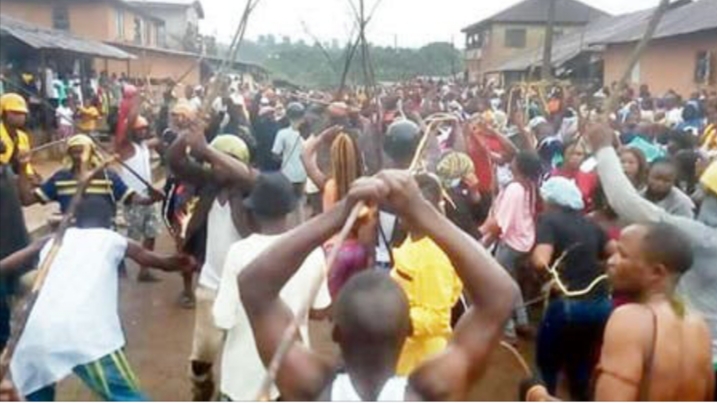 Following the stoppage of the annual celebration of Ogun Onire traditional festivals in line with the government directives due to COVID-19, youths of Ire-Ekiti in Oye-Ekiti Council Area of Ekiti State on Monday have protested the stoppage which has reportedly caused tension and chaos in the town.

WITHIN NIGERIA learnt that the protest started on Sunday evening which eventually turned bloody as two persons reportedly died and many injured over moves by the State Government to stop the Ogun festival.

Recall that Governor Kayode Fayemi had ordered stoppage of traditional festivals across the state as part of measures to flatten the curve of the spread of coronavirus in Ekiti.

It was also learnt that the Onire of Ire-Ekiti Oba Victor Bobade while trying to enforce government directives by admonishing the adherents of Ogun to shelve the celebration, met resistance by some irate youths who insisted on celebrating the festival.

According to The Nation report, Oba Bobade was whisked away by security attached to him when the youths besieged the palace with dangerous weapons.

Irate youths who were aggrieved over the stoppage of the festival reportedly set ablaze a vehicle belonging to the Monarch on Sunday over the action taken to halt the festival.

The state police commissioner, Tunde Mobayo has reportedly drafted his men to restore normalcy to the town after the crisis divided the two into two factions on Sunday and the crisis aggravated into a full scale war on Monday, causing attacks between the rival factions.

Reports have it that the victims were allegedly hit by stray bullets fired during attempts to quell the mayhem that paralysed economic activities and inhibited human and vehicular movements.

A source who pleaded anonymity told newsmen that the town is boiling as relatives of victims protested the killing.

“We have been having serious battle in the town since our monarch urged the Ogun Onire worshippers to stop.

“And the crisis between the factions loyal to the Oba and the worshippers led to the death of the victims”.

Speaking on the incident, the spokesperson of the Ekiti State Police Command, Mr. Sunday Abutu confirmed that two persons were killed during the bloody crisis.

“Yes, there has been crisis there since Sunday. We have been trying to quell it. Some groups of youths came to the palace and attack the palace, destroyed things and burnt some vehicles that belonged to the King.

“We got a distress call and had to mobilize policemen there and we were able to rescue the chiefs from the palace. We are still monitoring the situation.

“The people were protesting and probably disagreement from factions that are there led to the death of those persons. But investigations are on. Those who were involved in the act will be arrested and brought to book.

“On my desk here, I have two persons. Their bodies have been deposited in the morgue. We have been able to arrest one of the gang leaders and he is in our custody right now”.