Nollywood actress, Yvonne Jegede took to her Instagram story to lament bitterly about how it is difficult to come by a loyal person nowadays. The mother of one also complained about the consequences that comes with being in love.

According to Yvonne, being in love in this generation is terrifying. The 36 year old however came to a conclusion that loyalty is rare and people are quick and ready to choose a good time over a good thing. 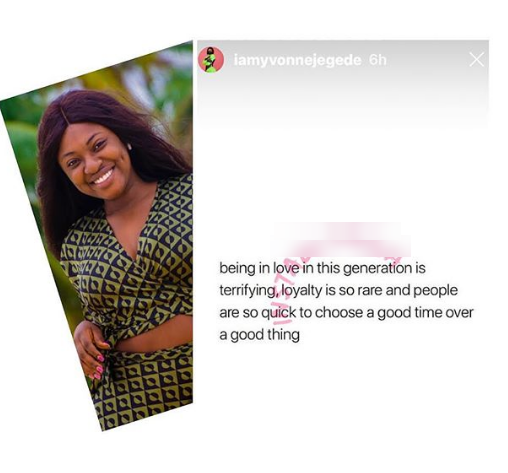 The model recently confessed about undergoing surgery to achieve her curvy body. According to the single mother of one, she underwent a surgery to help reduce her big tummy after she gave birth to her son.
The film producer and television personality became prominent in 2004 when she featured in the Nollywood movie Missing Angels. Since then, Yvonne has been able to make a name for her self despite the marital challenges she had with her ex, husband, Abouce.