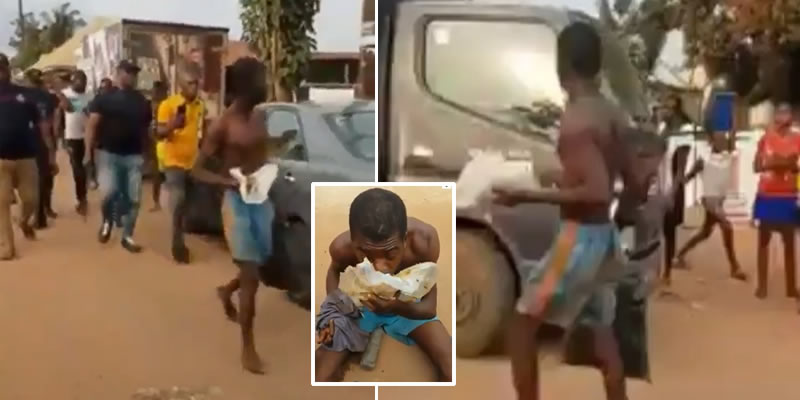 Viral Video: The moment a suspected ritualist was forced to eat stolen faeces in Delta

WITHIN NIGERIA had reported on Monday, about a drama that ensued at Ogbodoogba quarters of Okpa­nam, in Delta State after a yet to be identified middle aged man was apprehended by vig­ilante while stealing faeces in the early hours of Thursday, August, 27 2020.

The footage of the incident which was not made available while filing the previous report has now gone viral on social media, watch below;

WITHIN NIGERIA learnt that the young man suspected to be a ritualist was seen while packing faeces in children diapers from a dumpster and later apprehended while eating it.

Trouble, however, started for him when a resident, who saw the young man scampering through a trash can, carrying about two diapers from the trash can and went into a near­by bush where he was caught trying to eat the faeces and bread.

Angry mob, accompanied by the community vig­ilante questioned him after which they forced him out to the town square where he was made to eat the faeces.