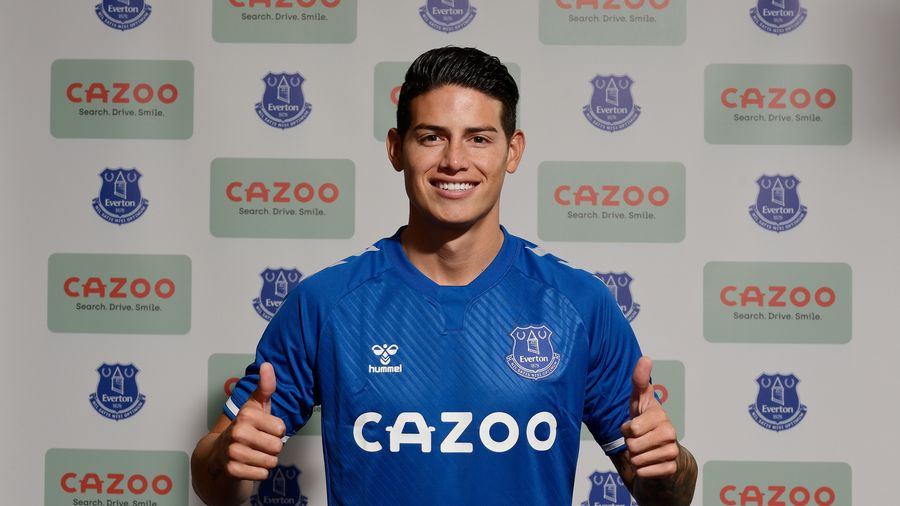 Everton have signed Colombia star midfielder James Rodriguez from Real Madrid in a deal worth £20m.
Rodriguez, 29, joins Everton on a two-year contract, with the option for a further season.

He signed for Real Madrid from Monaco in 2014 after winning the Golden Boot at the World Cup in Brazil that summer.

Speaking on his move Rodriguez said: “I am really, really happy to be at this great club, a club with so much history, and here with a manager who knows me really well.

“I’m looking forward to achieving great things here – and winning things, which is what everyone’s aim is.

“I’ve come here to try to improve, to get better. I’ve also come here to help the team to win, to play good football – entertaining football.”

Rodriguez, who was entering the last year of his contract with the Spanish champions, featured 14 times for Zinedine Zidane’s side last season.

It is the third time he has been signed by Everton boss Carlo Ancelotti, having joined the Italian at Real Madrid and Bayern Munich.

Rodriguez added:”I’m convinced, with Carlo and his technical staff, we can achieve big things and one of the big reasons [I signed] was the presence of Carlo Ancelotti.

“I have enjoyed some great times with him previously at two different clubs. That was a massive reason to come here.”

Ancelotti said: “James, as everyone knows, is a fantastic player with a lot of quality and a lot of ability to make assists for the strikers.

“He’s really excited about the project of the club and the fact we want to improve. He was really excited to sign and I didn’t spend time to convince him – he was already convinced.”

Rodriguez is part of an ambitious Ancelotti rebuilding programme at Everton, with the Toffees having signed Napoli’s combative Brazil international Allan and agreed a fee for Watford’s French midfielder Abdoulaye Doucoure.

Rodriguez had already established a strong reputation across Europe before 2014, courtesy of his time at Porto and Monaco.

He won the Portuguese league three years running before the age of 21, during which time he became the youngest to win the division’s player of the year award, aged 20, in 2012, before Monaco bought him for £38.5m.

He scored 10 goals and made 14 assists in 38 appearances for Monaco before impressing on the global stage, scoring six goals to win the World Cup Golden Boot in Brazil in 2014 and secure a move to Real Madrid.