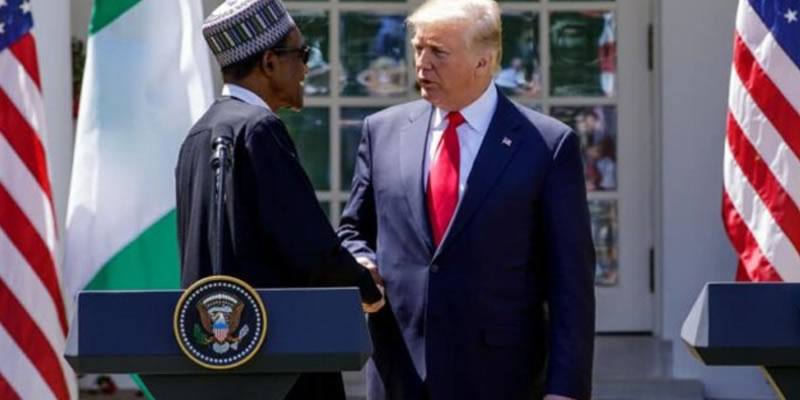 President Buhari on Tuesday disclosed how he schooled the United States President, Donald Trump at the White House in April 2018 Trump that the killings of Christians in Nigeria has got nothing to do with ethnicity or religion.

WITHIN NIGERIA recalls that On April 30, 2018, Buhari met with Trump in Washington to discuss issues ranging from the fight against insurgency, the economy, among others.

In a closing remarks at the end of the two-day ministerial performance review retreat at the presidential villa, Abuja, President Muhammadu Buhari said he told Donald Trump that killings were outcome of clash between cattle-herders and farmers, which had increased due to “climate change and population growth” as well as the “leadership failure” of previous governments. And it has got nothing to do with Christainity.

“I believe I was about the only African among the less developed countries, the president of United States invited, and when I was in his office only myself and himself, only God is my witness, he looked at me in the face, he said ‘why are you killing Christians?’

“I wonder if you were the person how you will react. I hope what I was feeling inside did not betray my emotion.

“So, I told him that the problem between the cattle rearers and stagnant farmers I know is older than me not to talk of him (Trump). I think I am a couple of years older than him.

“With climate change and population growth and the culture of the cattle rearers, if you have 50 cows and they eat grass, any root to your water point, they will follow it, it doesn’t matter whose farm it is.” Buhari said.