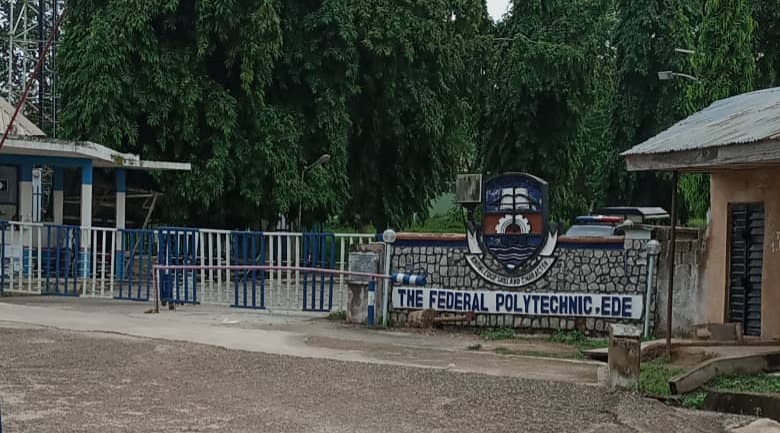 SPECIAL REPORT: Inside Osun Fed. Poly where graduates groan over withheld certificates, say only ‘connected’ ones get theirs

When you are admitted to study a particular course in school and meritiously passed series of tests and examinations, you are entitled to an academic certificate, a document that certifies your efforts. But the story of some graduates of the only federal polytechnic in Osun is different and a complete reverse of norms in schools. The institution do not issue certificates to all graduates.

Some graduates of this tertiary institution, the Federal Polytechnic, Ede only completed their academic sessions to wander and toil the labour markets without academic certificates despite payment of necessary fees such as clearance, Alumni, development levy among others.

WITHIN NIGERIA reporter met with some graduates who were denied certificates and officials of the institution to know the true situation of things.

On a quiet Sunday morning (August 20th, 2020), WITHIN NIGERIA reporter recieved a call from one troubled and devastated Sodiq Adesina. He is one of the graduates of the Federal Polytechnic Ede who have not received certificates after four years of leaving the institution and all attempts he made to get his certificate were futile.

Sodiq who is a graduate of Hospitality, Leisure and Tourism Management (HLTM) department narrated his ordeals as a job seeker and also listed job opportunities he lost because he went to a school where certificates issuance hold no importance or of less priority. ‘I only look up to God and the press for possible intervention into this matter, the closing remark of a rather troubled graduate who ended the call abruptly.

Federal Polytechnic, Ede is a Nigerian tertiary institution that was established in 1992. It is located in Ede, a town in Osun State, southwestern Nigeria. It is a National Diploma awarding institution. A little check on the school’s website revealed that student portals, post UTME details, short profiles of top officials and brief informations about departments and faculties are accessible but there are no concrete informations about the institution which clears the possibility of digitization of certificates in such school setting of zero digital presence.

On Friday, August 28, WITHIN NIGERIA reporter visited the school to investigate the certificate scandal. Despite the clusters of shops surrounding the school’s gate, the graveyard silence is no doubt a signal for any guest that there are no academic activities ongoing in the school owing to the closure of all schools by the Federal Government as part of measures to curb the widespread of COVID-19.

When WITHIN NIGERIA reporter visited the Exams and Records unit, the offices were under lock but attempts made by the reporter to speak with some of the affected graduates, president of ALUMNI and concerned officials of the polytechnic were successful.

Findings revealed that only 2015/2016 set of graduates were affected but there are some allegations that some graduates have recieved their certificates owing to polytechnic ‘big-wigs’ they know and relate with. It was also alleged that the rector of the school appended his signature on some certificates which were issued to some graduates who know these big-wigs.

I do not really want to talk much because it is depressing and annoying, Samuel Olusegun who is a graduate of Quantity Survey told WITHIN NIGERIA reporter.

They told us that only graduates of Accountancy department certificates are ready. It is heartbreaking to witness the new level of nonchalant attitude of the institution. I pleaded with her and explained the urgency of the certificates but she told me to go and obtain ‘In Lieu’ at the registrar’s office, Olusegun added.

Lamenting how she wasted her time and money last year October while pursing her certificates, Akande Olanike, a graduate of Hospitality Leisure and Tourism Management Department told this reporter that she has given up.

The rector has not signed the certificate and they are not sure when he would sign it yet we lose attempts to apply for available jobs everyday, a rather sad HLTM graduate said.

Oluwabunmi Fajuyi who is a graduate of Banking and Finance said she is highly disappointed in the rcetor and registrar of the school because she does not know why they have not signed the certificates.

I was shocked when they told me at the Exams and Records unit that only Accountancy Department certificates have been signed and others are pending. It is a complete eyesore and so disappointing, the graduate of Banking and Finance stated.

A visibly angry graduate of Quantity Surveying Department simply identified as John questioned the motto of the institution which is knowledge, skills and character.

‘Close to 4 years now and they have not prepared our certificates yet they could be bold to tell us that they have only signed the certificates of Accountancy departments. It is very sad and may God heal the school of its troubles, John lamented.

A graduate of HLTM department, Sodiq Adesina described the delay in certificate as annoying and unacceptable.

Adesina appealed to the school management to be more responsible and diligent in their duties.

We all suffered and went through hell. We have paid all necessary dues and we owe the school no kobo. In a saner society, every official involved ought to be punished for negligence of duty but it is quite sad that ours is not a saner society, Adesina decried.

The Public Relations Officer of the institution, Mr O.A Lawal during an interview with WITHIN NIGERIA reporter described the allegation leveled against the rector that he (the rector) signed certificates for some graduates who are connected to the big-wigs of the school as a fallacy and appealed to the public to disregard the information.

Although the school’s PRO, Lawal confirmed the delay in the certificate issuance but he further disclosed that plans are in top gear to start issuing the graduates their certificates without delay.

The initial setback has to do with the Covid-19 saga, which prompted staff from level 01- 12 to stay at home on the order of FG. We are now back on track, Mr. O.A Lawal added.

When this reporter argued that COVID-19 outbreak in Nigeria started in March but those experiencing delay in certificates graduated in 2016, the school’s PRO asked the reporter to consult the registrar for additional information.

The registrar declined the request of this reporter to ask further questions but reaffirmed the position of the PRO that the school is on top of the situation.

When contacted, the president of the Federal Polytechnic Ede Alumni Association, Mr. Shittu Bashir Olaleye expressed his dissatisfaction over the whole matter.

Mr. Olaleye disclosed that only the digitisation of certificates and transcripts collections can resolve the certificate issue.

Speaking with WITHIN NIGERIA reporter, the Alumni President said the association has called on the management to put in place a seamless process whereby alumni members would not be subjected to unnecessary burden before certificates can be issued.

“The leadership of the association has also set up a fact-finding committee to look into and understand why certificate/transcript collection are being delayed and/of non-issuance at all.

We have equally met with with the officers in charge and proffered appropriate solutions such as deployment and implementation of electronic transcript/certificate management system, Mr Olaleye added.