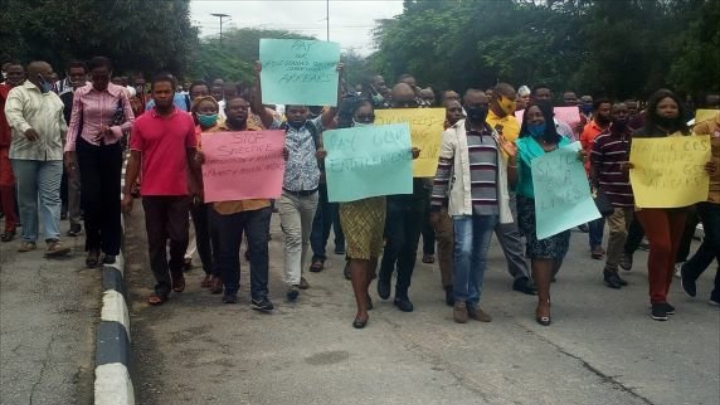 Following the non-payment of allowances, members of the University of Calabar (UNICAL) chapter of the Academic Staff Union of Universities reportedly staged a protest.

The chairman of the institution’s chapter of the union, John Edor while addressing newsmen during the protest said the allowances had been owed for more than five years.

Edor also said that some of the unpaid allowances include promotion arrears, fellowship and conference allowances and other entitlements.

“We are demanding full payment of our entitlements from the management of the University of Calabar,” he said.

“Some of the entitlements include promotion arrears, fellowship and conference allowances and other entitlements.

“So, we have no option than to embark on a peaceful protest. When this fails to yield the desired results, we will carry our mats and pillows to occupy the University of Calabar. It is our common heritage.’’

He also accused authorities of the university of being insensitive to the plight of lecturers even in the face of the current face-off with the federal government over the IPPIS issue.

“Even when the federal government has refused to pay our salaries, the management could not help us,” he added.

“We can no longer meet our family obligations. Lecturers are suffering in the midst of plenty.”

According to NAN, no principal officer of the university, was however, available to listen to the protesting lecturers.

The absence of the principal officers, it was gathered, might not be unconnected to preparations for the final selection of a new vice-chancellor for the institution, billed for September 10.