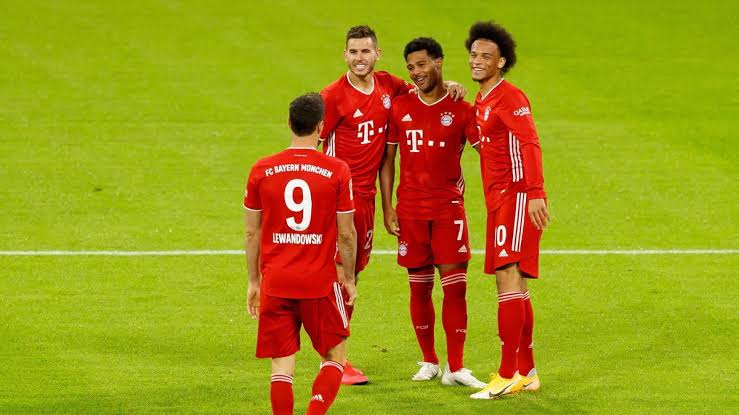 Bayern Munich got over the loss of Thiago Alcantara to Liverpool by opening their Bundesliga title defence with an 8-0 rout of Schalke at the Allianz Arena.

Serge Gnabry bagged a hat-trick, while Leon Goretzka, Robert Lewandowski, Thomas Muller, Leroy Sane and Jamal Musiala also found the back of the net for the German and European champions who never relented from the first whistle until the last.

It was Gnabry who got Bayern Munich on their way with an excellent left-footed strike from 16 yards after being played in behind. Goretzka made it 2-0 within 20 minutes, stroking home a side-footed effort from inside the box after being set up by Thomas Muller.

Further salt was added to Schalke wounds when Lewandowski was brought down inside the box, with the Polish striker converting from 12 yards himself to net his first goal of the new campaign.

The floodgates opened further in the second half, with Gnabry scoring a second and a third before the hour mark to complete his hat trick. Muller netted his first of the new season after being set up by Sane before Sane himself found the back of the net after being released clean through on goal.

Youngster Musiala came off the bench to score his first Bundesliga goal late on as Bayern Munich continued to press home their significant advantage over a Schalke team that was effectively beaten after only three minutes.

It was difficult to envisage how Sane could possibly make Bayern Munich’s attack any more potent, but on this basis he has already made the Bavarians a more ruthless outfit. The former Manchester City winger was on sparkling form on his debut for his new club, scoring once and contributing two assists. Sane got in behind the Schalke defence countless times. It was as if he’d been unleashed after two frustrating seasons at the Etihad Stadium. Sane could take Bayern Munich to an even higher level.

The result is the highest win for an opening game of a new Bundesliga season.